Kirkey sells brackets to match the seats and I picked up two sets of them for the install (part number 99204). Rather than bolt the brackets directly to the floor I added a couple of cross members to the frame and bolted though them, and the floor, in order to mount the brackets.

I also have the black cloth seat covers from Kirkey. They add padding to the seat bottom which makes the seating reasonably comfortable. 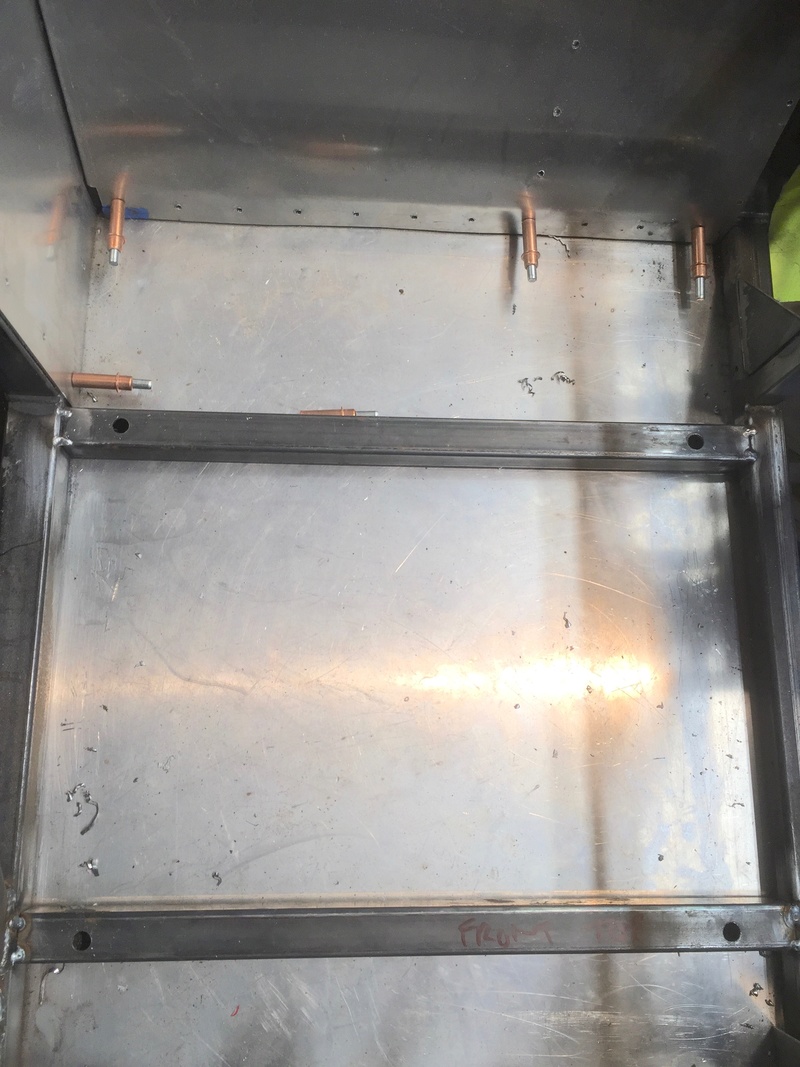 Chassis cross members tack welded in place and drilled to match the holes on the seat brackets. I used 1" square steel tubing cut to fit. Each seat is centered in the available cabin space either side of the transmission tunnel. The picture looks a bit skewed because of the camera angle but it is all square and properly aligned. Forward/aft positioning was determined by considering the pedal placement, seat belt geometry and ability to adjust the tilt of the seat. My seats do look a little further forward than other Stalkers but this location works for me. 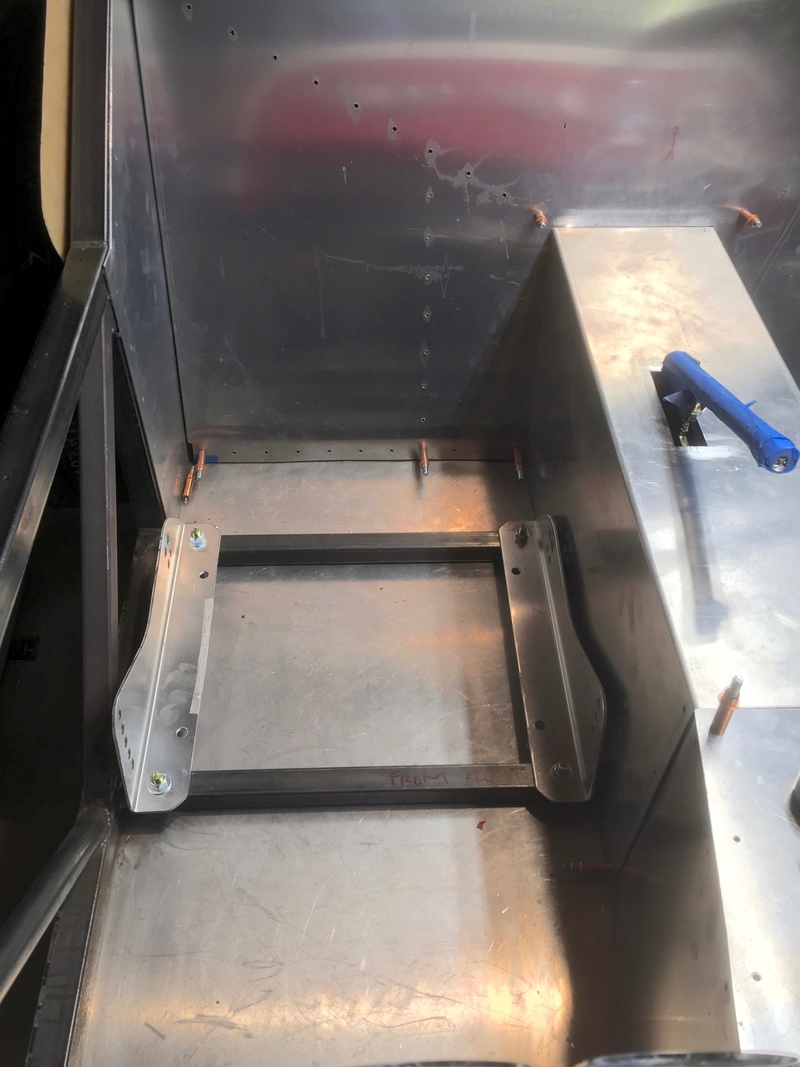 Passenger side seat brackets bolted in using whatever hardware I had on hand. The proper grade 8 bolts, washers and nyloc nut hardware is in the mail from Fastenal and should arrive on Monday. 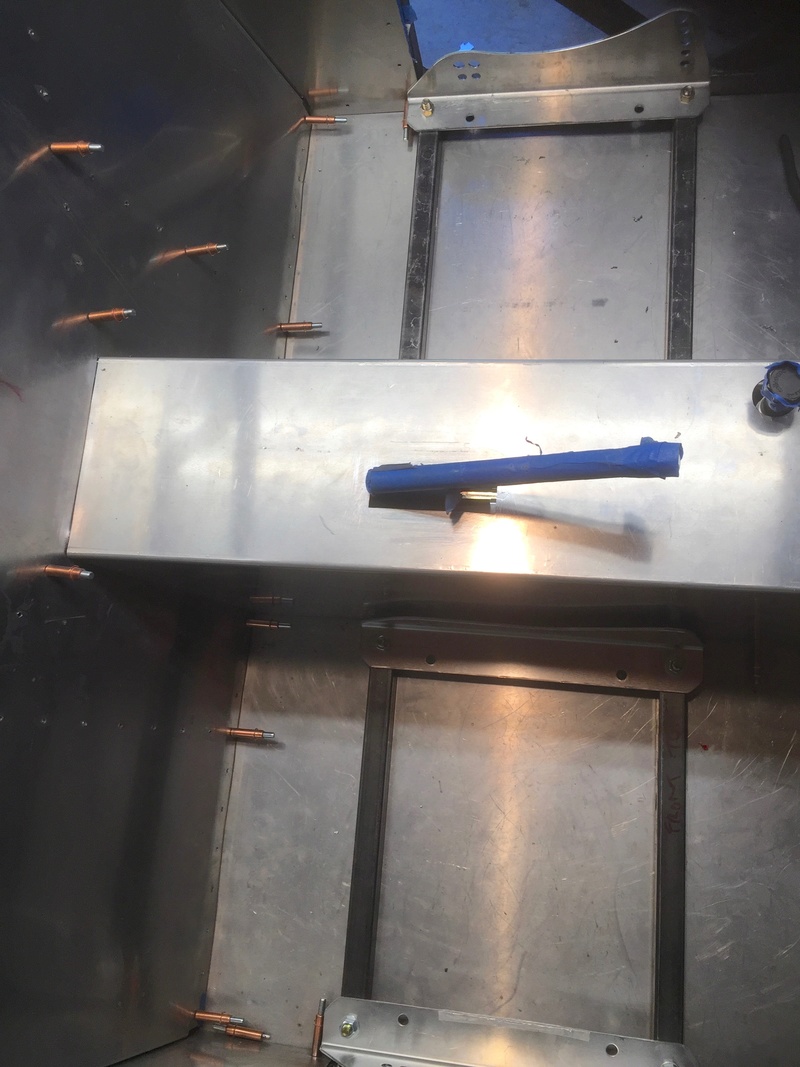 Installation on the drivers side is the mirror of the passenger side but the left-right spacing differs a bit because the passenger space is a little smaller. In any event there should be just enough clearance between the side of the seat and the transmission tunnel to squeak a bolt in there to bolt the seat to the bracket. The seats can be tilted somewhat. 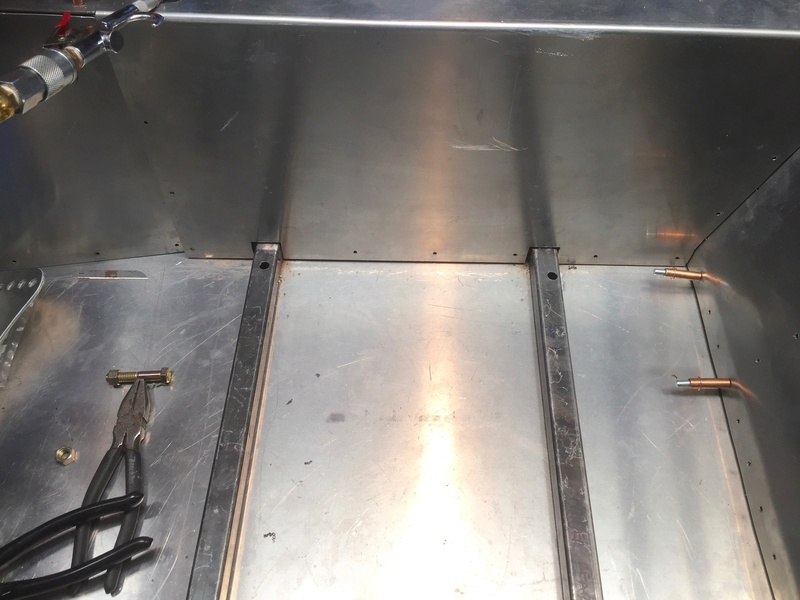 For harnesses I've opted for Schroth Profi II ASM FE four point harnesses that have the ability to be converted to a five or six point harness by adding a sub-belt. Unfortunately they're a six-to-eight week lead time item - and not cheap. I won't need them immediately though.

Happy to have these seat brackets installed - it was a solid weekend's work to get everything fabricated, located and aligned, drilled and welded. They seem solid enough so I'll call this done for now until the harnesses arrive in a few weeks.

Do you ever plan on tracking the car? If so, a full 6 point belt set and HANS would be a good idea.

I feel so planted side to side in the seat that I sometimes don't use the lap belts at all for short runs on the street: just shoulder belts to the camlock on the anti-sub belts.

Well I always said I wasn't going to track the car but you never know, the more track day videos I look at the more tempting the idea is. I wouldn't discount the idea entirely but a lot of stuff would have to be reworked I guess for that to happen. For things like high performance driving events or autocross, are they covered by a sanctioning body the way other race events are? That would presumably determine what type of harness and HANS device would be required.

I've just been reading about the East Coast Sevens HPDE at Millville, NJ. That's not far from here... and the 2016 event looked like fun.

Anyway it's a good point about the 6 point set. I may splash out for the additional belt just to upgrade the set - about $30 extra I think per side. It would not be a lot of extra work to add the extra mount points for it.

Dave,  excuse me while I get on a soap box.  You probably already know this but let me highlight what's important to driving on track.

I recommend HPDE events for just about everyone.  It just automatically makes everyone a safer and more skilled driver.   I did them several times a year from 2000 until 2004 when I dove into full throttle open wheel racing.   And I continued to instruct novices in their own car on track after I went racing.  I use the same basics I taught to raw novices in the race car with 20 of us trying to squeeze thru T-1 on lap 1.  Having fun and doing well on track is really pretty simple to understand;  it takes a lot of practice to get it right every turn every lap.

Unless you accidentally get into a bonehead track day group, safety will be the first priority and well respected by all drivers.  The few hot heads out there are usually black flagged in short order.  So this means that everyone can go at their own pace and comfort level.  And they can drive whatever is safe enough to be street legal;  it can be a grocery getter with a Baby on Board sticker.  Doesn't matter.

So feel free to put your toe in the water before you feel like you have to modify anything on the car.  Definitely start on street tires and learn the basics of the line, threshold braking etc.  the simple basics that we racers rely on 90% of the time to be quick enough to have fun and duke it out in a gentlemanly way.

Regarding required safety features of your equipment:  Due to the street legal nature of most cars in a track day event, (air bags and crush zones) the track day club may not require a HANS or 6 pt belts.  A Snell approved helmet and a 3 pt  belt will do just fine as far they are concerned.  But for us with a rigid frame (no designed crush zones) and no air bag,  I think you'd agree a HANS makes sense.

Oh and the anti-sub belts are simple:  they can be attached to the same bolt as the lap belts.  And you sit on them, or they go under the seat cushion;  they don't go under the seat itself.  At least not in our formula cars that have no actual seat;  we just have a poured bead "seat" which is nothing more than a form fitting cushion.  Reason being is that they should fit  as close as possible to the back of your thighs and wrap up around your "junk."  There is a lot of confusion out there by street racers buying $100 belts and figuring out how they're going to bolt them into the tin floor of their Honda Civic.

I continue to marvel at your workmanship.

Ted, thanks. I am coming around to the idea of trying this car on the track particularly in light of your comments about street-legality being an entry point for some types of track event. I had it in my head that I would have to invest in a lot of specific items for the car in order to be able to participate and it sounds like that's not the case for some HDPE events. I agree with you on the HANS device and a Snell approved helmet. In these cars we have so little to protect us - every little helps.

Thanks for the kind words about the project btw - at the end of the day it's just me bashing away at lumps of metal with tools but hopefully it will all come together into something that drives and looks like a car. Thanks for following the build!

Also, most importantly: if you choose to use a harness, please please please use a HANS. Never strap yourself into a harness without a HANS. EDIT: BTW, I use the term HANS generically; I have a NecksGen.

3pt belts are very safe and are usually acceptable at all levels of HPDE. Harnesses won't be *required* until maybe advanced levels of HPDE or actual SCCA racing or similar. But, you might as well take the harness mounting points into consideration now while everything is exposed.

Regarding the mounting points for your seat belts or harness, triple check the resulting angle of the belts. In general, I tried to follow Schroth guidelines for belts/harnesses and SCCA guidelines for mounting hardware, even though I have no plans to do SCCA racing:

XL, thanks. So what I read from your comment is that you set things up for both 3-point and 6-point in your car, correct, and can switch between them as circumstances demand? I didn't think about doing that but it's worth thinking about it. I'll dig around some more and look at your build - thanks for the suggestion! Where did you get your 3-point system from?

comled wrote:XL, thanks. So what I read from your comment is that you set things up for both 3-point and 6-point in your car, correct, and can switch between them as circumstances demand? I didn't think about doing that but it's worth thinking about it. I'll dig around some more and look at your build - thanks for the suggestion! Where did you get your 3-point system from?

You got it. I leave the 3 pt belts installed permanently, and clip/unclip harnesses before/after a track day. Seat belts are from Mike Mills at seatbeltplanet, (855) 736-0088 with the following specs:

I completed installation of the seats and the harnesses. Since access to the rear seat mounting bolts is somewhat limited I took the approach of assembling the seat and its brackets and mounting bolts off the car, then fitting the seat in position with the rear bolts feeding downward so the nut is attached from underneath. The front bolts can then pass through from under the car with the nuts fitted inside the cockpit. I would have preferred to do that for the rear as well to avoid the potential hassle of having the nuts corrode on, but it wasn't possible given the lack of access. 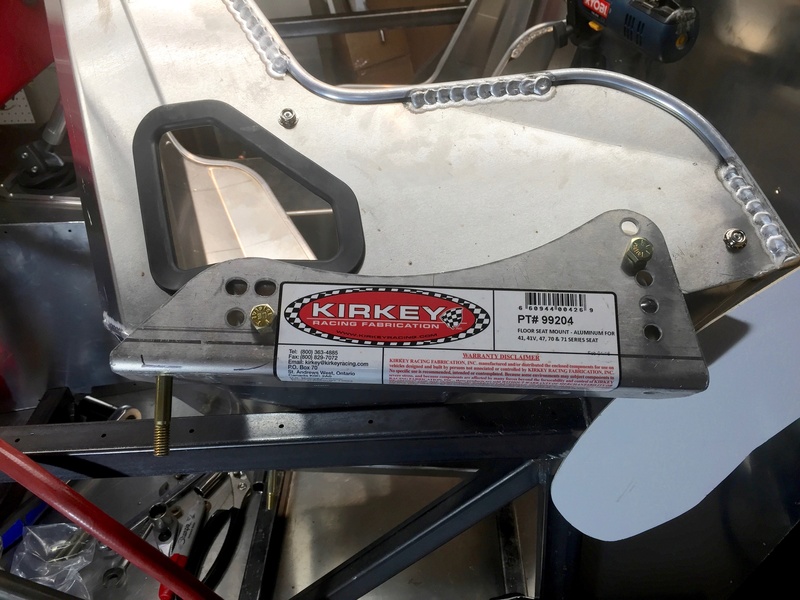 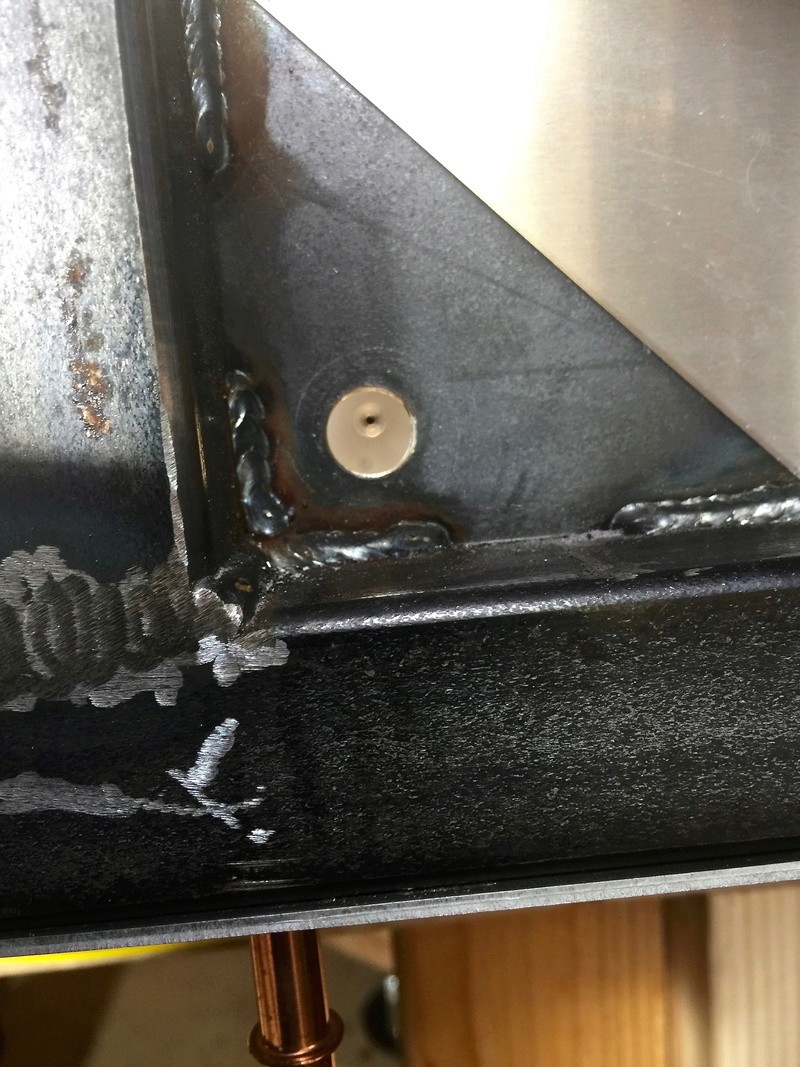 Before installing the seats, the lower belt/harness mount points have to be drilled. In my case I was able to use the existing welded-in plates as they allowed the belts to follow the proper geometry. The mount bolts are 7/16 dia and so I drilled accordingly. The outboard mount holes shown here are easy; just have at it with the drill in a position that allows the belt to follow the proper angle into the seat and across the passenger. I used a seat cover in a bag to simulate me being in the seat to get this right. 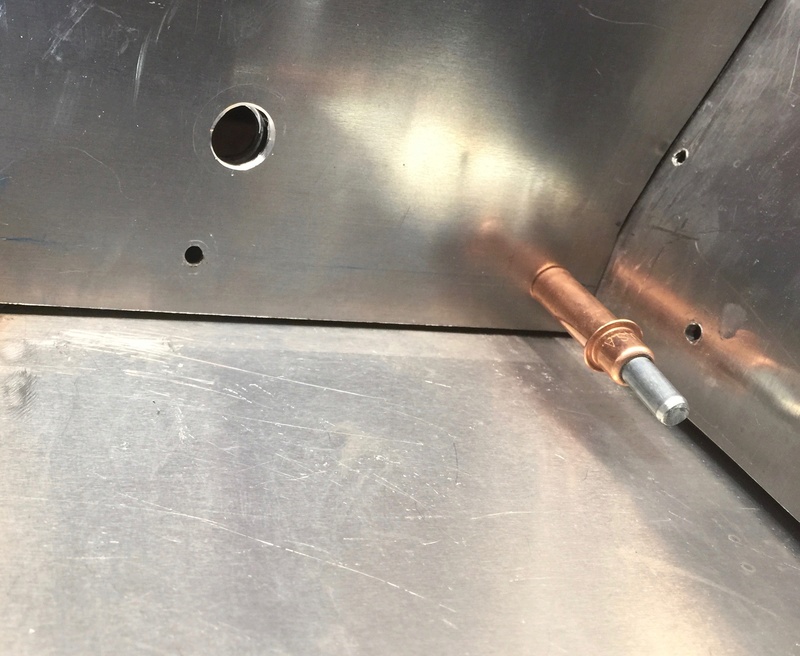 The inboard holes are more difficult because you have to accommodate the sheet metal of the transmission tunnel. I drilled the mount point in the frame first, then measured exactly where it was relative to one of the sheet metal screw holes and transferred that measurement to the transmission tunnel. Fortunately I got it right and everything lined up. I installed the two halves of the lap belt, then fitted the seats. 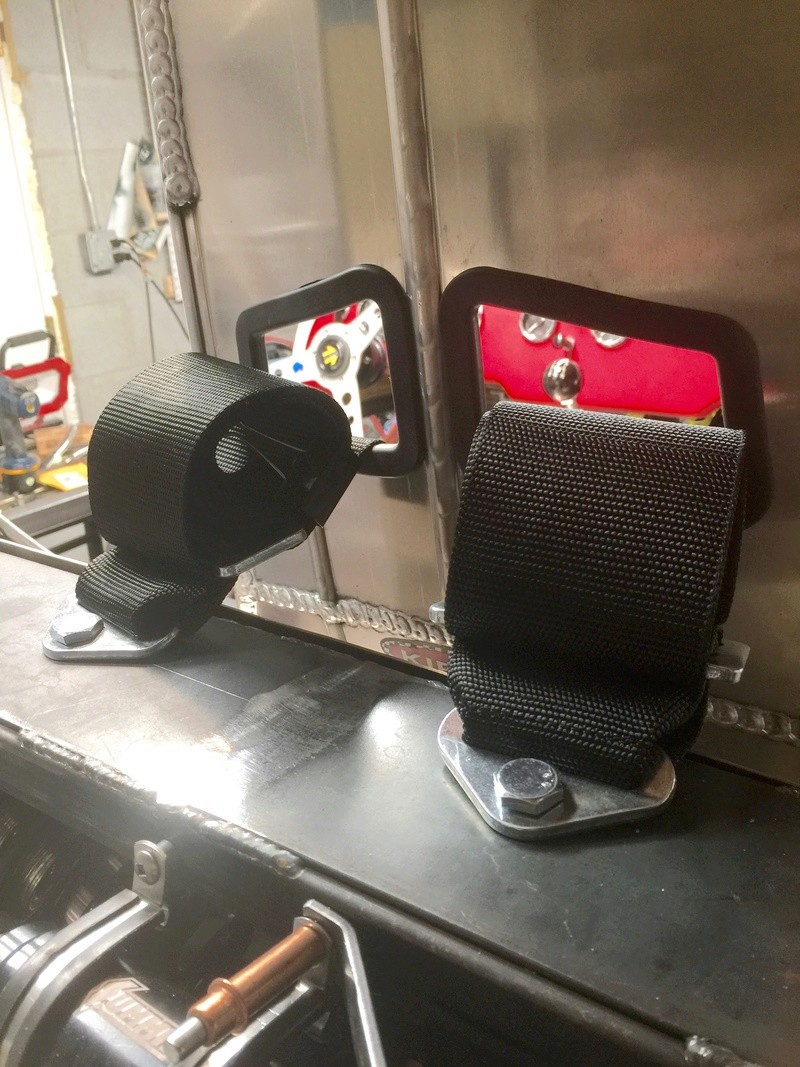 With the seats in place I fitted the harnesses using the existing upper mount holes in the chassis. The belt angle is on the edge of the Schroth recommended angle but I may tweak it by raising the upper mount point slightly to relieve the belt angle. 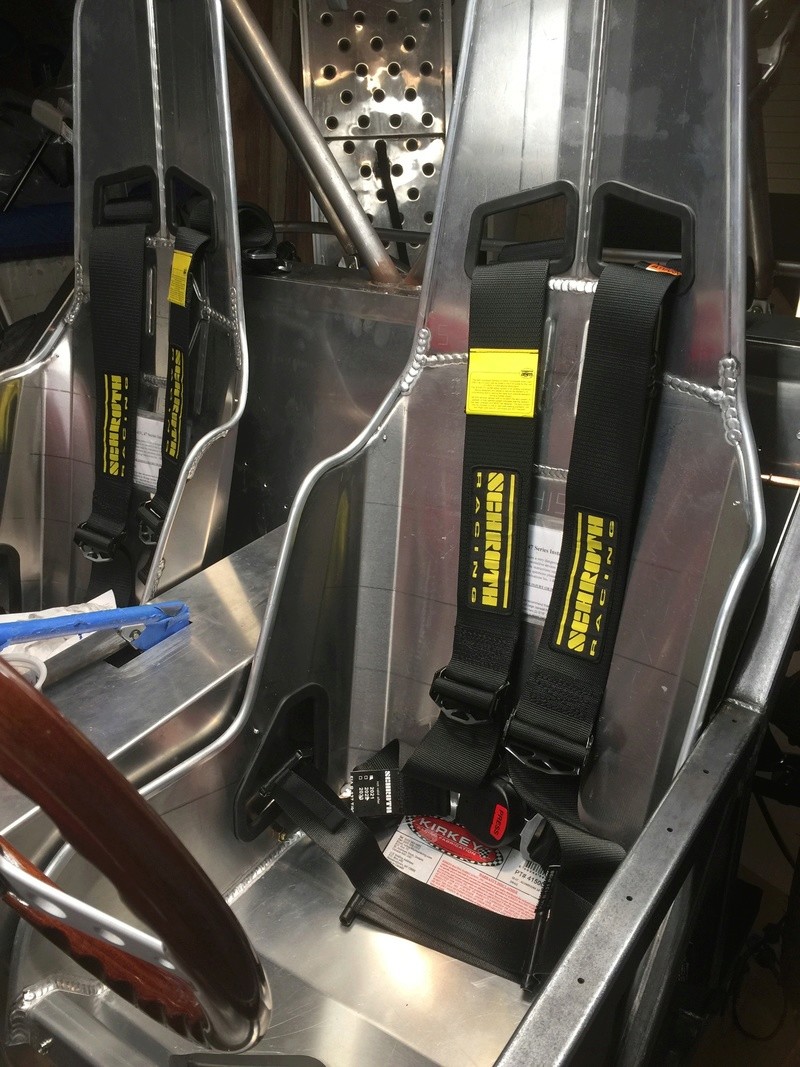 Kirkey seats and Schroth harnesses in position. These are pull-up type harnesses and I found them quite easy to adjust once I installed myself in the seat and played around with them.

Still to do: look into 3 point standard belts and decide how to install given the shortage of space around the seat back.