Haven't had a lot of time this past couple of weeks to work on the car as spring is here in Pa and I have a lot of outdoor jobs to do, but I have tinkered at getting the parking brake put together. This is a familiar path and other builders, notably XL's #22 and #23 have implemented great solutions to the problem. I'm drawing on their experiences as I put my own parking brake implementation together. 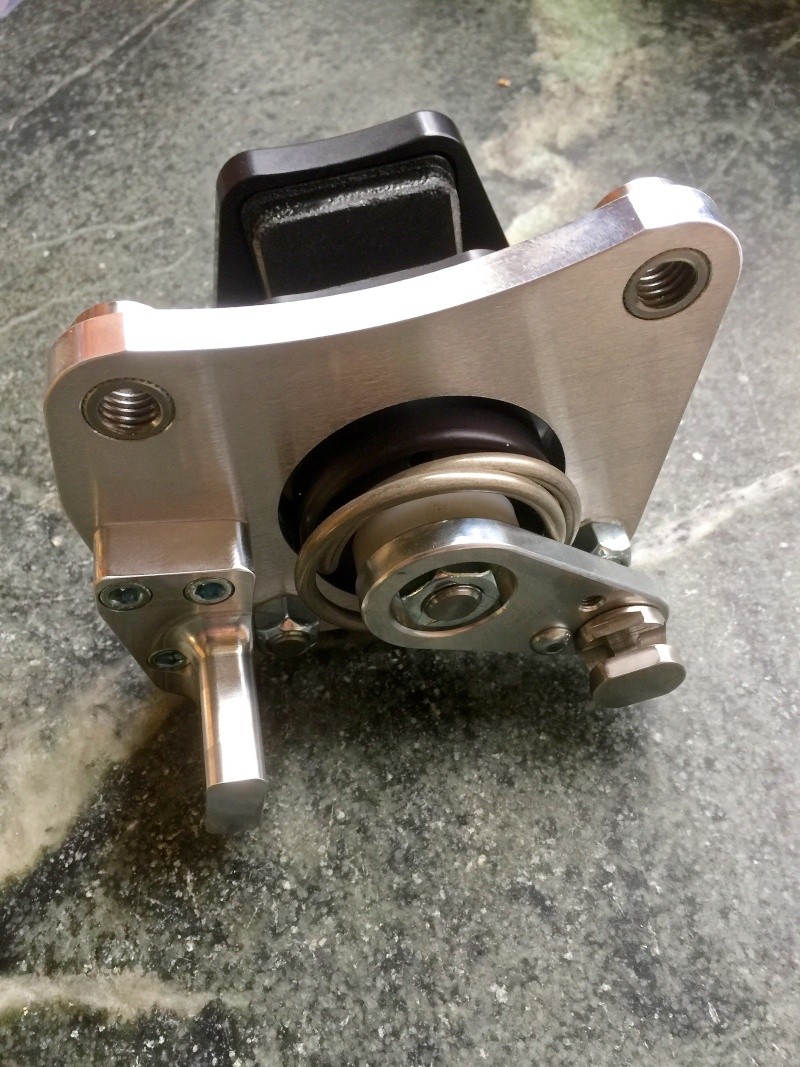 These calipers from IPS are definitely the way to go. I emailed and subsequently talked with Mark at IPS and he confirmed my configuration. My rotors are EBS RK7171's which have a thickness of 0.945" and a diameter of 12.717" if I remember correctly. I added the optional mounting bracket and the undrilled cable mount brackets: these I will drill and tap to suit the Lokar handbrake cable that I plan to use. These calipers are absolutely top-notch, beautifully made and very high quality, inspiring confidence in their ability to do the job. Mark told me that they are 'wearless' pads: the pads retract completely from the rotor when the parking brake is disengaged. They are not cheap but they are worth the expense - plus for these thicker rotors there really are very few options out there. I got an order off to IPS with an estimated shipment 5 days after I ordered (shipment was right on schedule) and at the same time ordered the Lokar cable set and parking brake lever. 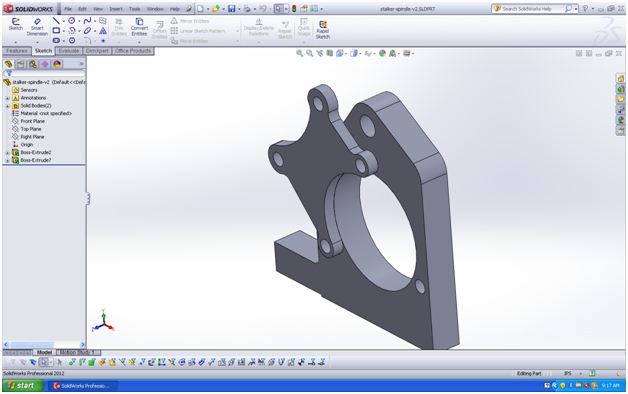 Like XL's #22 and #23 I had to come up with a bracket to mount the caliper to the spindle. XL#23's bracket mounts directly to the spindle using the same bolts that hold the hub on and I opted for that approach. I spent Sunday afternoon taking measurements off the disassembled spindle (which I learned from Mark is also called an "upright") and modeling it in Solidworks. I modeled just enough to get the basic geometry relating the hub, rotor and caliper mounting brackets. The calipers come with a dimensioned drawing/instructions for determining where the caliper should be positioned relative to the rotor and hub: essentially the mounting centers are 4.31" from the center of the rotor, and are 3.5" apart from one another. There should be a minimum of .050" clearance from the caliper bridge to the edge of the rotor - that seems tight but doable with some care. 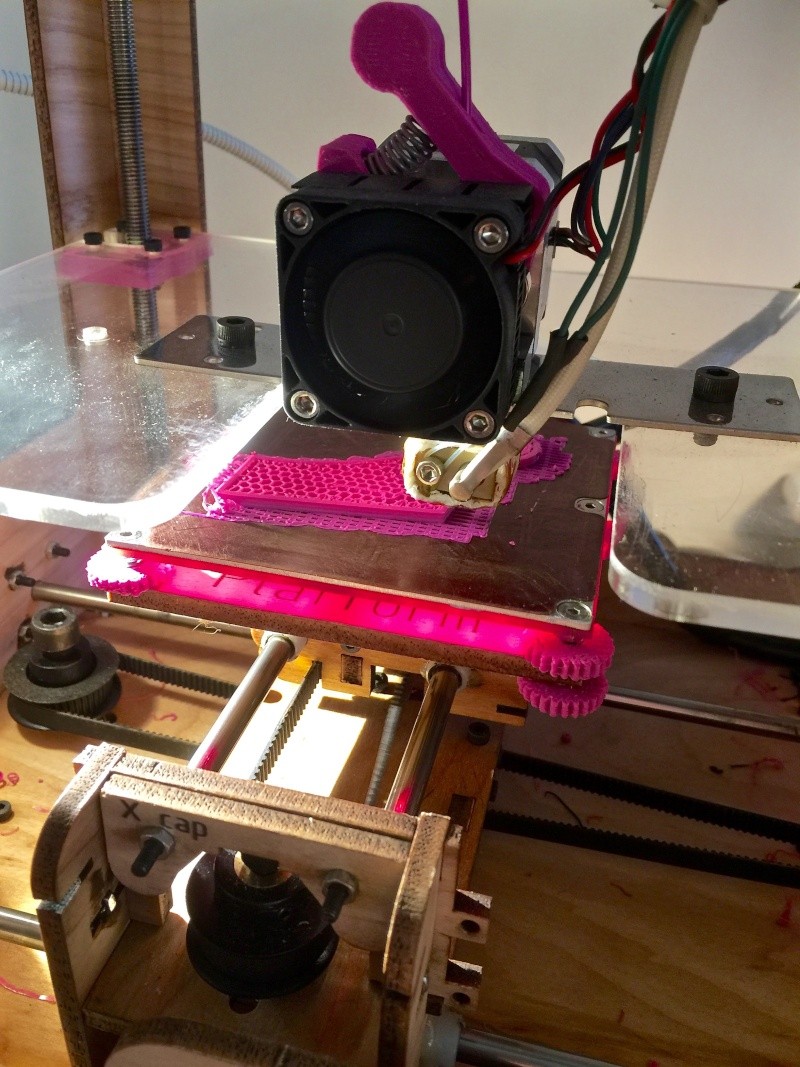 A few years ago I built a 3D printer. By today's standards it's a bit clunky and limited but I couldn't pass up the opportunity to prototype my parking brake bracket. I'm not expecting it to be a super accurate fit but for proof of concept this will do fine. 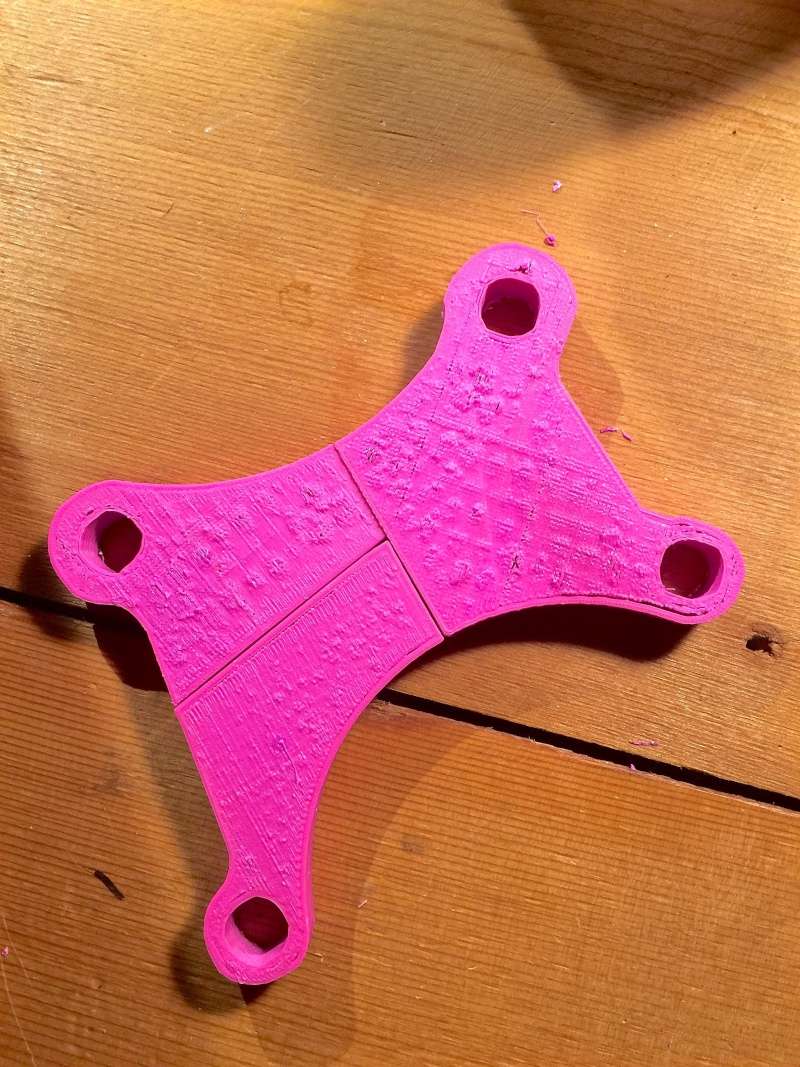 I printed the model in 3 pieces because my printer only has a relatively small print area. After some minor cleanup I glued the 3 pieces together with superglue. 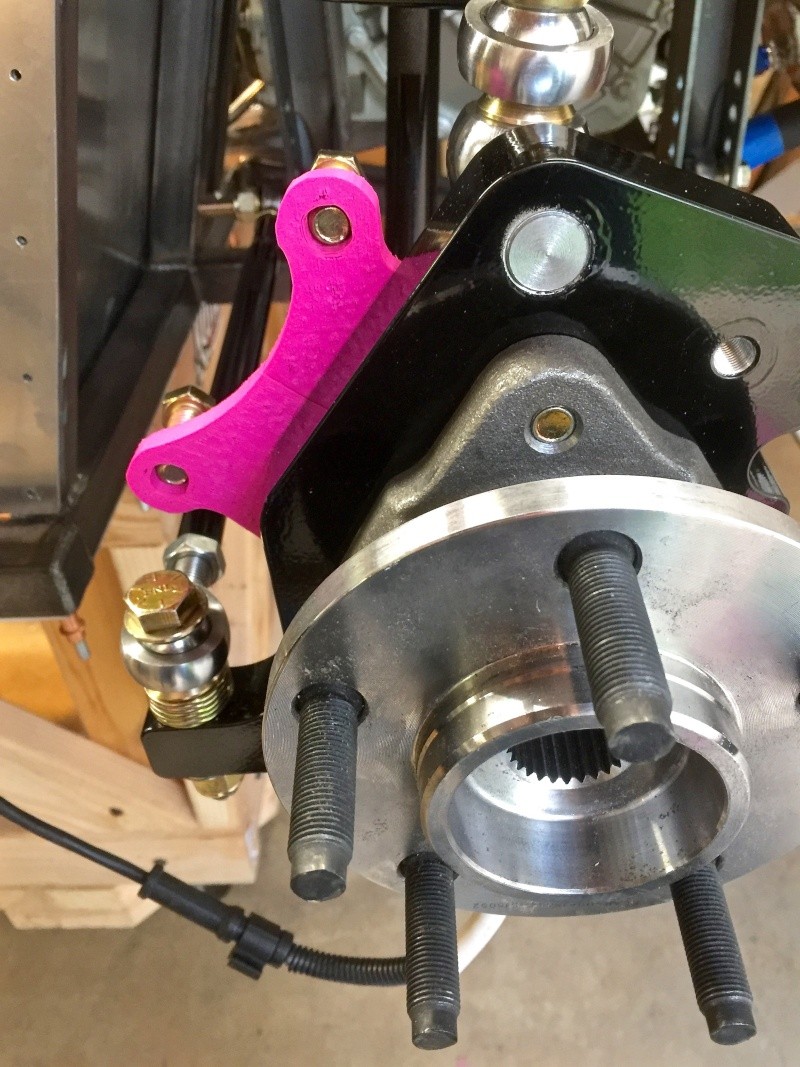 I had to clean up the mounting holes a bit but everything aligned just fine on the spindle end. 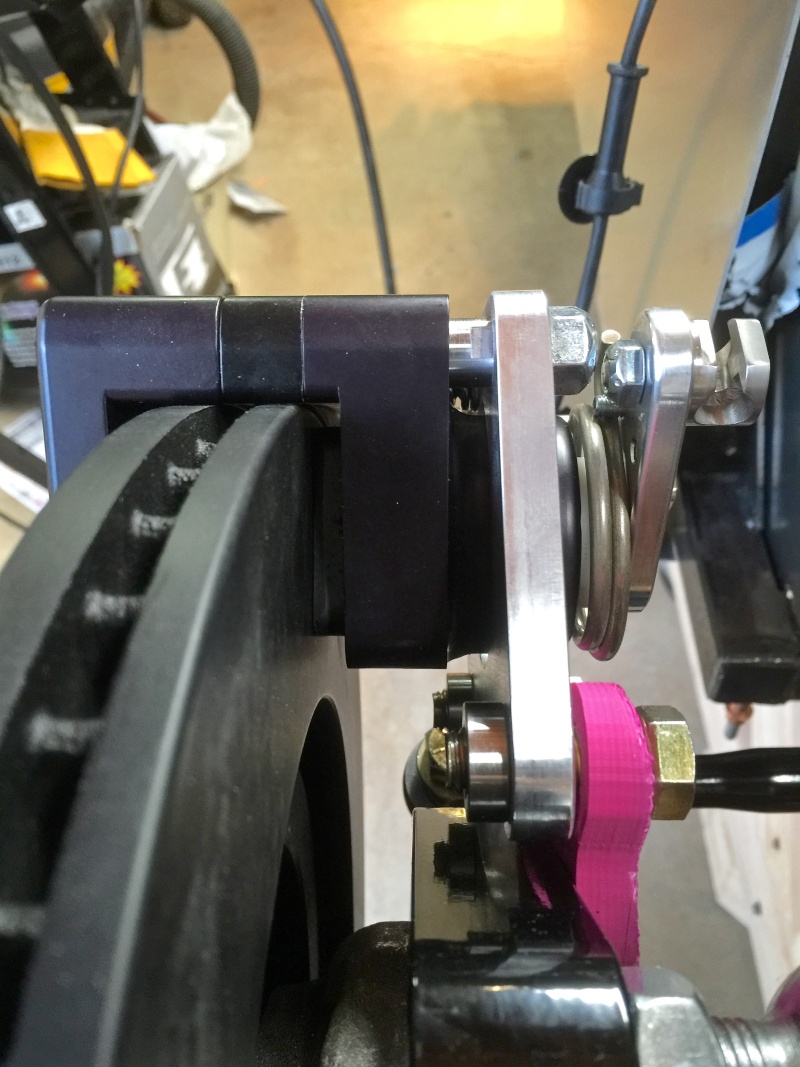 I definitely have to open up the holes on the caliper end: the holes are 7/16x14 threaded on the IPS bracket. At the same time I need to address the caliper bridge to rotor clearance of .050" - just a fraction too tight on this 3D printed version but then the tolerances on the printed part are pretty rough. I'll add a little extra space on the bracket as a contingency. 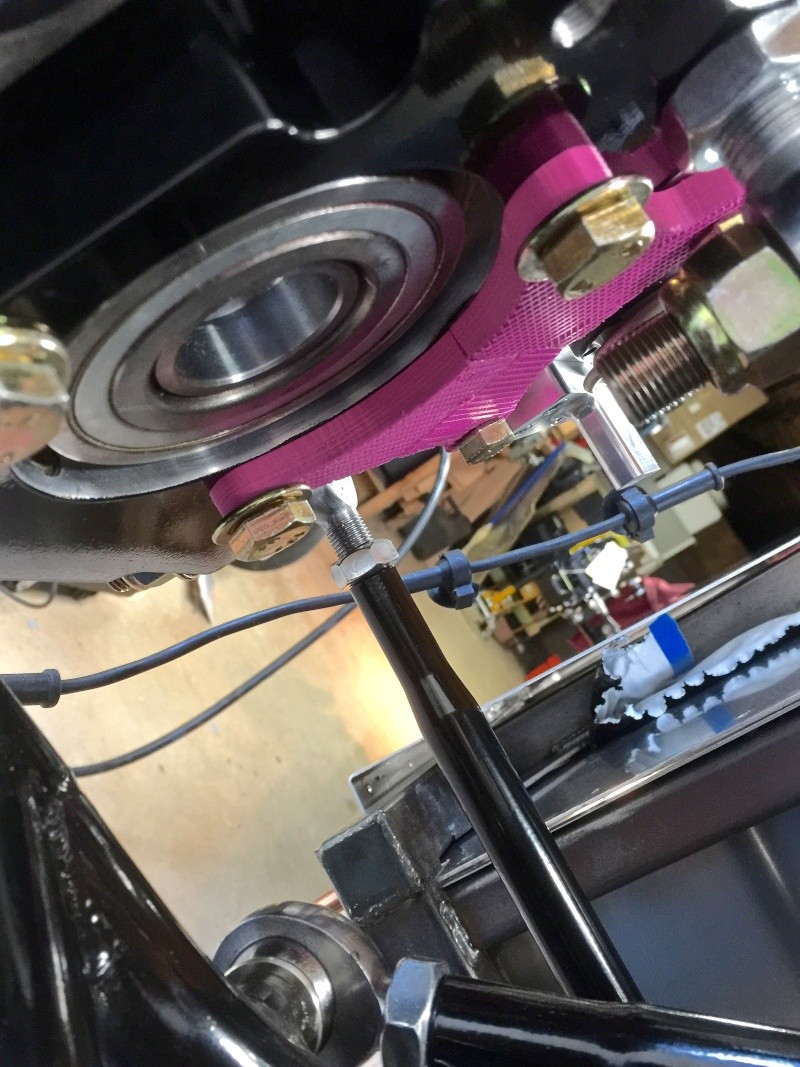 Viewed from the rear where it attaches to the hub bolts. It's a nice clean fit around the back of the hub bore but I will test fit one of the driveshafts this weekend to make sure there is no interference.

Looking great Dave. I'm enjoying your build thread, I admire people like you who take the time to document and post such thorough detail on the builds. I'm slowly working on mine but (real) work is always crazy and doesn't leave much time for working on the Stalker, let alone writing it up and posting the progress.
Thanks again and keep it coming.
Dan.

Thanks for the kind comments Dan. I hope what I post will be useful to someone else at some point. I looked at a lot of build threads last year when I was deciding whether or not to go ahead with this project and I found the most useful ones for me were those with a lot of detail and pictures.

What stage is your build at?

That's terrific! Save those patterns for sure. I'm sure they'll come in handy for future builds.

My parking brake caliper brackets arrived on Friday and I fitted them over the weekend. 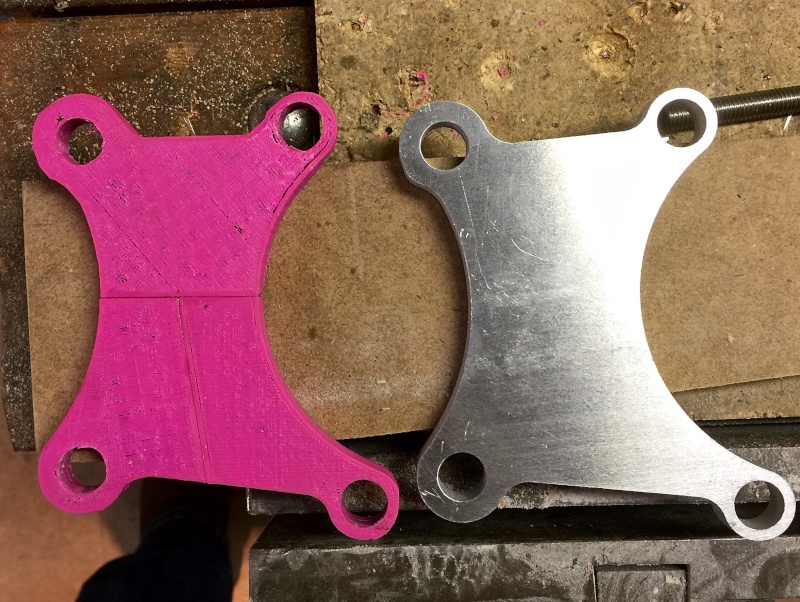 Here's a comparison of the 3D printed one and the final item. I modified one of the dimensions before getting the part machined to allow for proper clearance between the caliper bridge and the outside of the rotor. I also opened the holes out a little. The new brackets bolted right on and the calipers were a great fit. 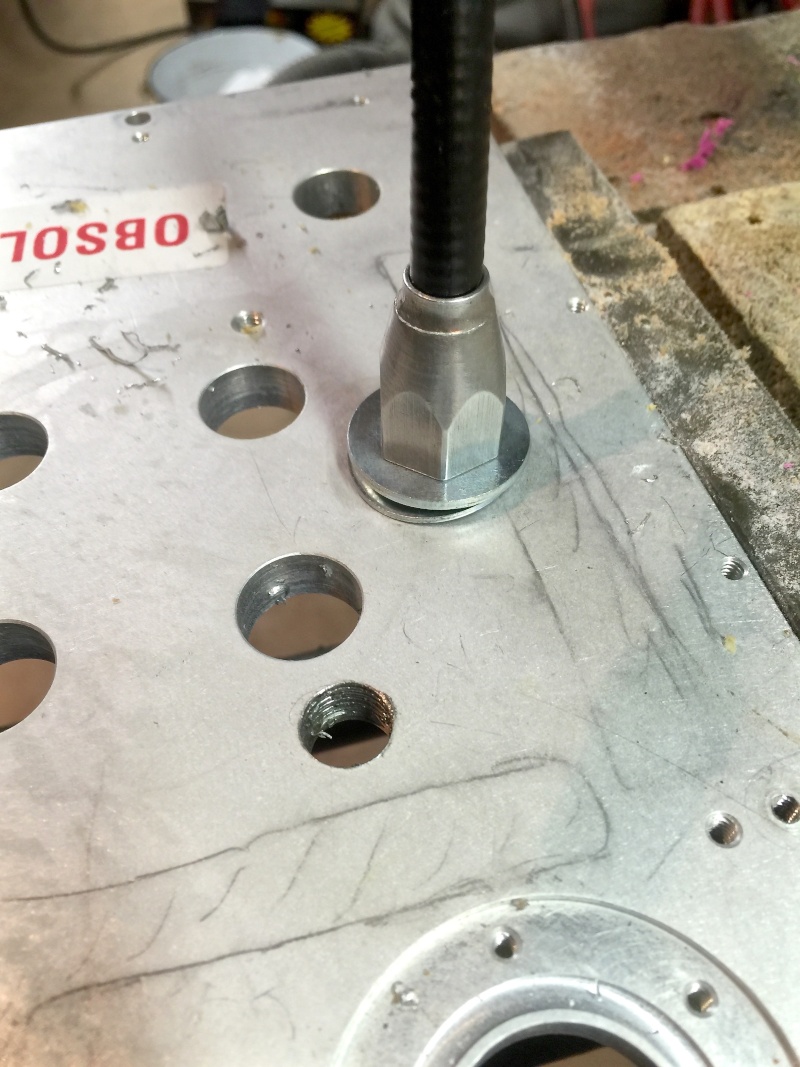 I'm using the Lokar universal handbrake cable that has to be cut to size to fit the application. The cable housing end that fits into the caliper is threaded 7/16-14 and has a short section that's unthreaded followed by a slightly wider diameter section that's also unthreaded. I used a combination of a flat washer (machine bushing) and a spring washer that I picked up at the hardware store to accommodate the shoulder and unthreaded section. The 7/16 tap calls for a 23/64 drill: here I'm checking the fit of the cable end and washers into a test drilling in a scrap piece of aluminum before drilling the actual calipers. 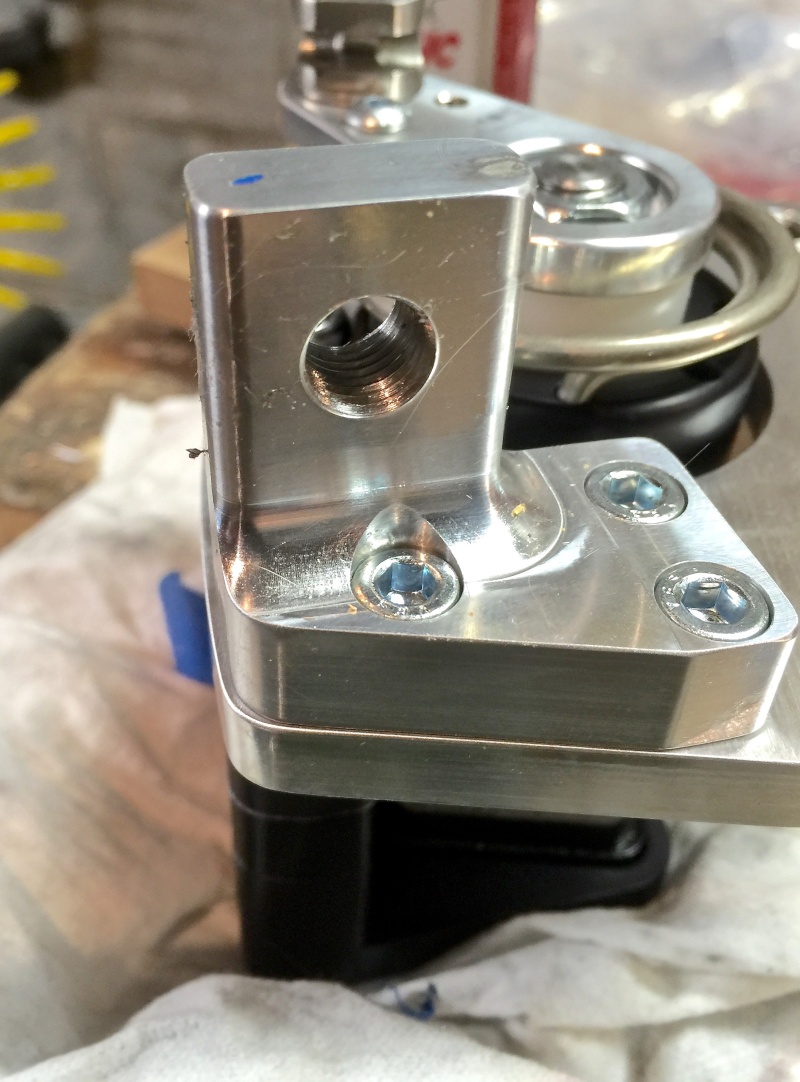 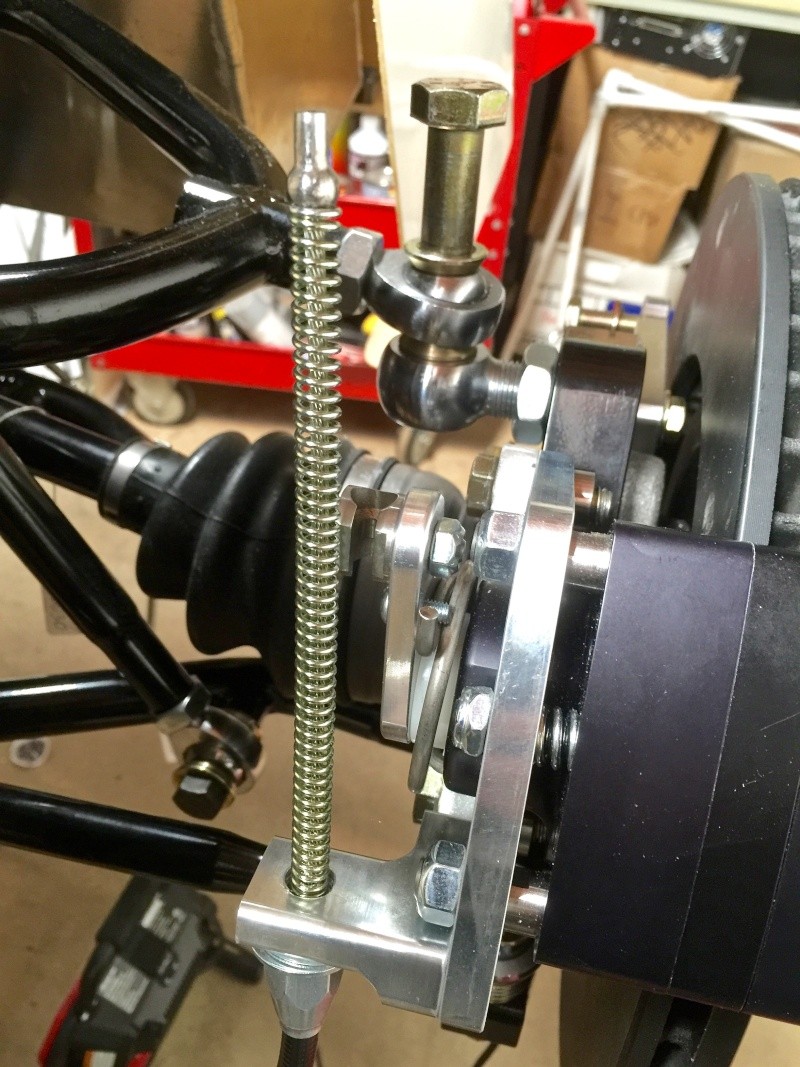 The assembled caliper and cable assembly mounted on the car. You can see that the spring is way too long. I trimmed it to fit using an air cutoff tool. 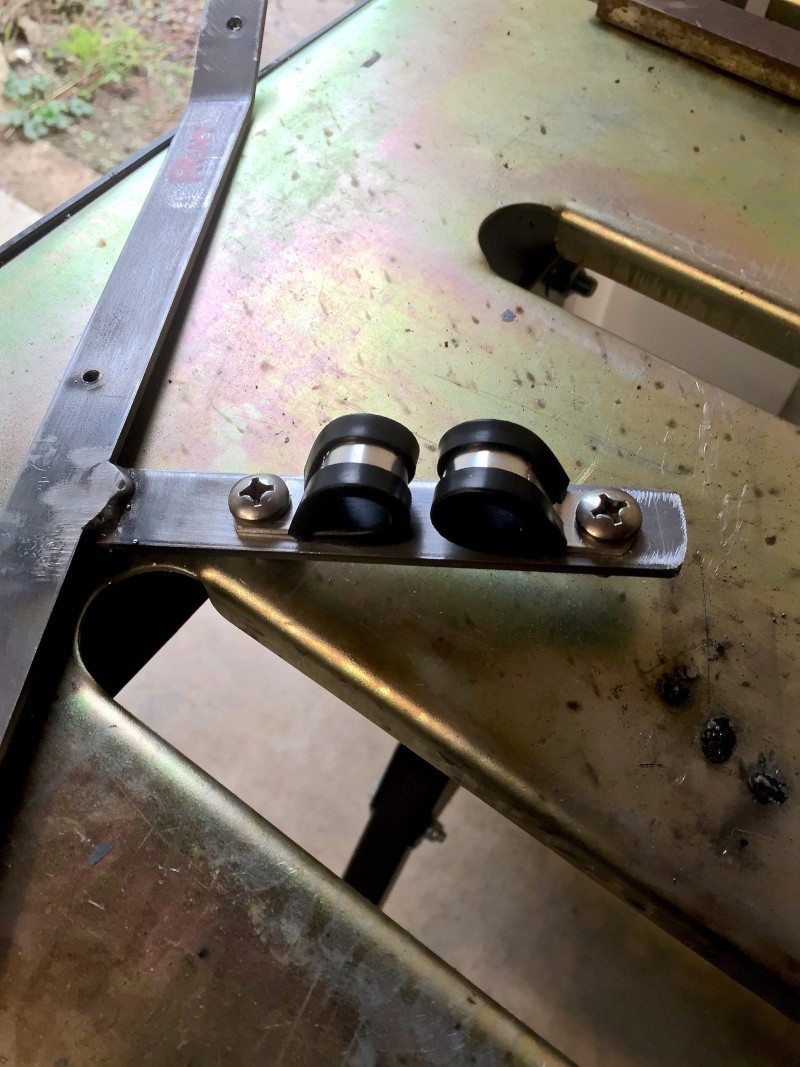 To allow the cables to route squarely onto the brake lever I modified this bracket that I'd made previously to accommodate the brake hardline where it passes over the differential. Two cushion clamps spaced with their centers roughly lining up with where the brake cables pass into the adjuster assembly ensure that there are no tight curves. 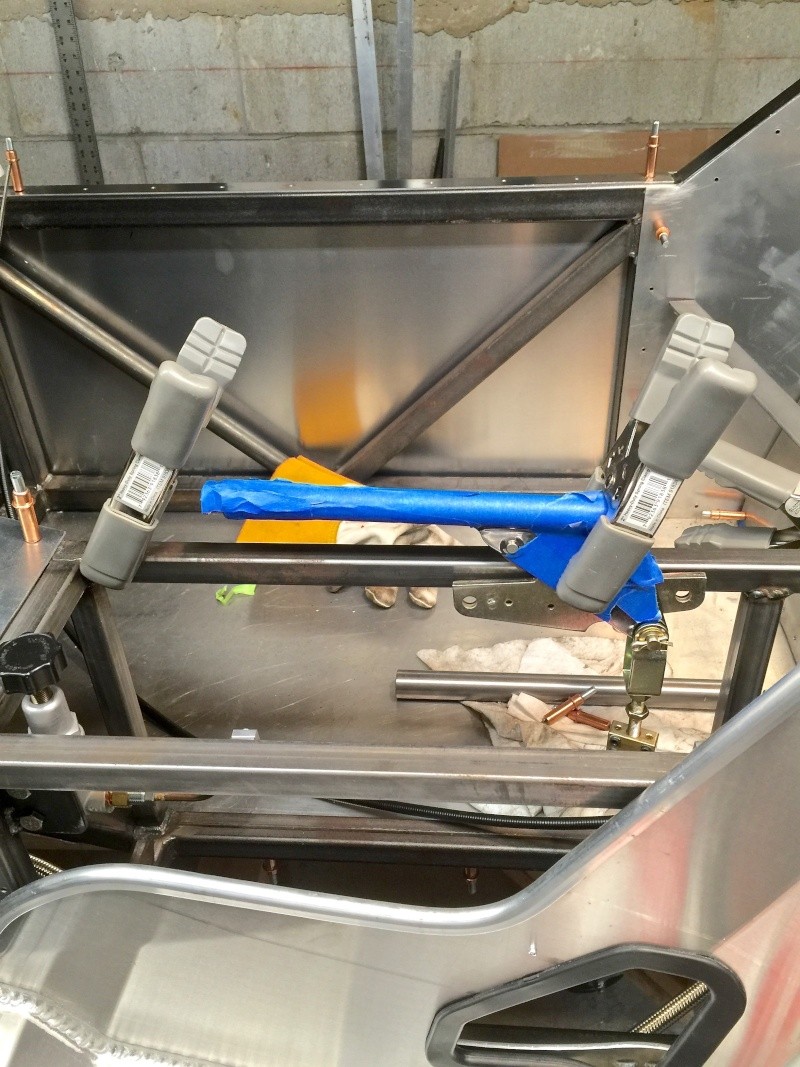 Testing the handle for position. It passes the armrest test; my arm will rest comfortably forward and to the left of the brake lever, although this isn't too critical because I will be adding an arm rest parallel and above the height of the brake lever anyway. I had to leave enough room behind the handle to accommodate the brake adjuster assembly. I think the complete length came to about 11" including the handle and the brake cable adjuster.

For some reason the brake lever is running downhill in this picture. That's not where it ended up... 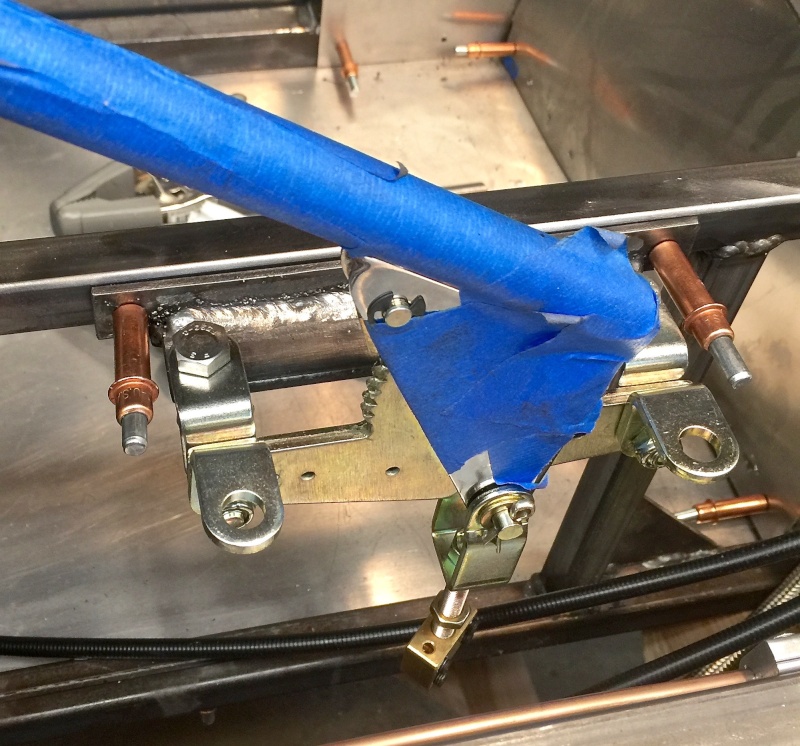 I struggled with how best to attach the lever and eventually came up with this L shaped bracket that will be welded onto the chassis. 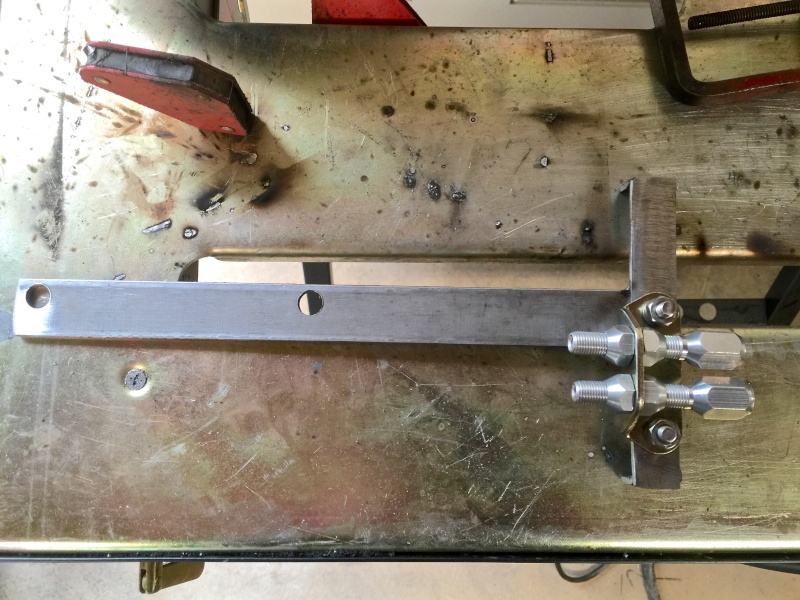 This assembly supports the cable housing part of the brake adjuster. It bolts to the two brake lever holes that are not being used for support. The far end attaches to a small bar welded to the chassis. 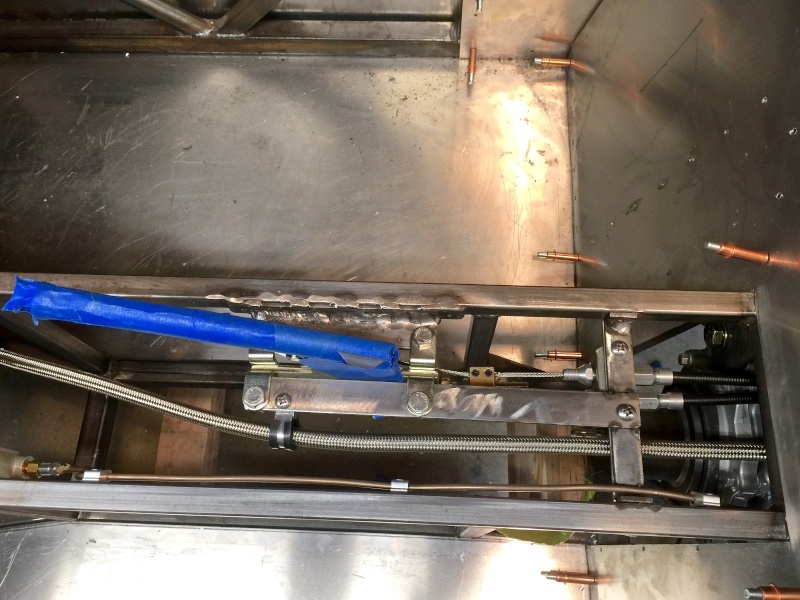 The finished assembly welded in place and the parking brake cable installed and cut to size. I added a couple of 1/2" cushion clamps to provide support for the fuel line running from the rear of the car. 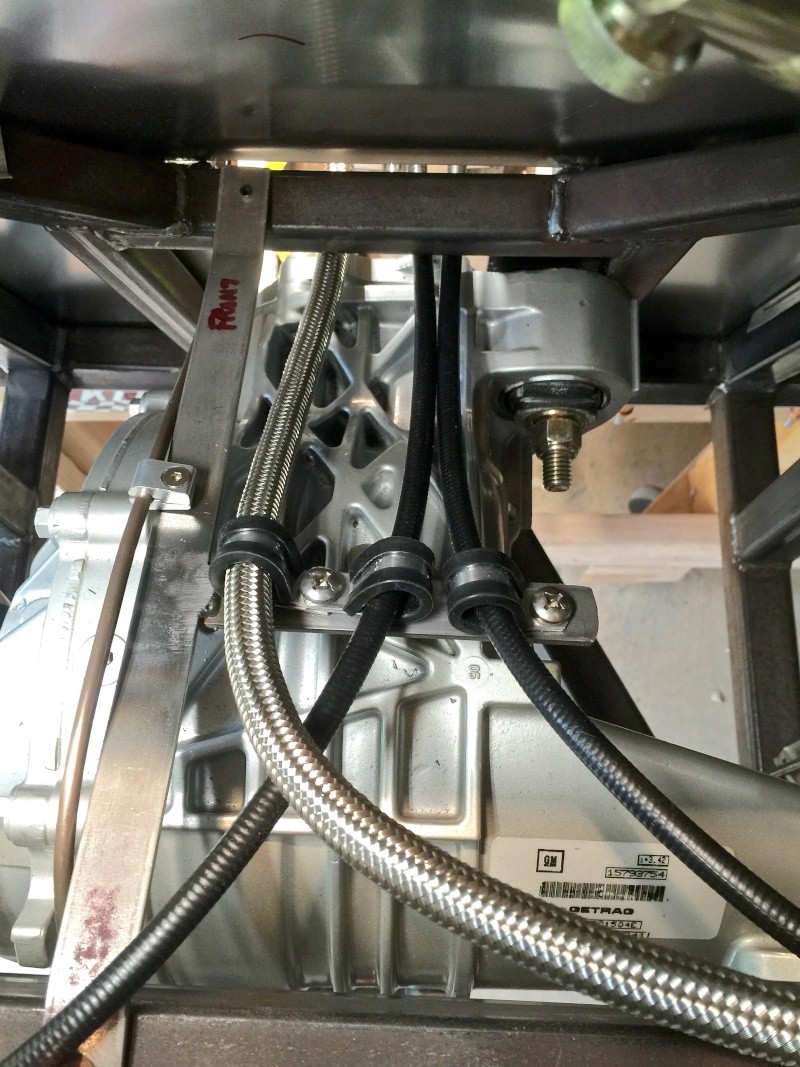 The two brake cables plus the fuel line attach to the modified brake hardline support bracket. That bracket turned out to be more useful than I expected. 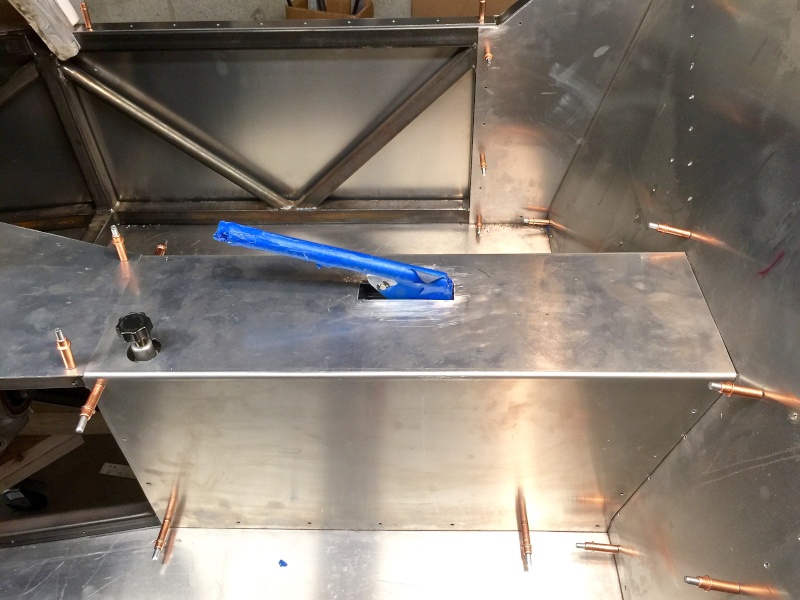 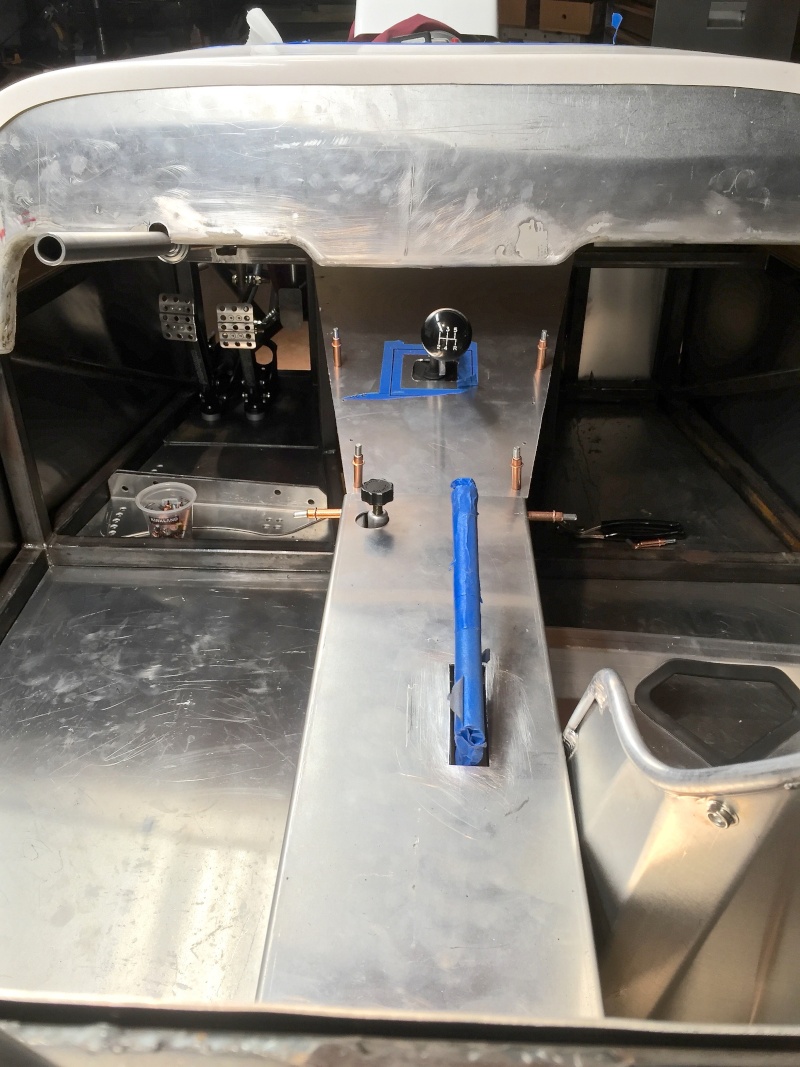 I made a rectangular cut in the tunnel cover to fit over the brake lever. You can see how it is slightly offset toward the right of the car. The next job will be to fit a bezel and leather boot over the brake lever and I'll trim the gear shift at the same time. I'll be making the boots for both the brake and shift levers from scratch.

I also have to do some fine adjustment on the calipers to make sure the pads properly clear the rotor when the brake is disengaged.

All in all the final results are very gratifying. The brakes apply firmly after a couple of clicks but I won't be able to fully assess whether it's working until I can put some rotational force on the rear hubs. There's practically no flex in the assembly at all so you can really haul on that thing and it doesn't move. This was a lot of effort and fabrication but hopefully it will pay off in the long run.
_________________
2015 Stalker Classic R/L26 in progress
2010 Triumph Bonneville T100
1977 MGB
1973 Norton Commando MkII Interstate
1966 SWB Land Rover Series 2A
1960 Hammond A100
1949 Ford 8N

I am assembing a classic r, I think I have to put parking brakes in my car. I have the IPSCO calipers. I was hoping perhapes you would be willing to let me use your design for mounting brackets, CADs/technical drawings?