So, after a couple of years of living it with it, I finally changed the rear end from 3:42 to 3:23. I've got a Tremac 5 speed out of a Camaro and the S-10 rear end that came with the kit, or so I'm told. On the front straightaway I need to get to about 125 mph before lifting for T-1 at Thunderhill in CA. I'd redline too early and realized 5th is not a racing gear since it's overdrive and worthless on track. Also, 1st is useless on the street as well as the track, so I went to a 3:23. Although I haven't been on track yet, I'm pretty sure it will pull all the way to lift and turn in for T-1. Also, it's a lot more civilized and driveable on the street. I'm sure the 3:42 is choice for auto-cross, but it didn't work for me on my tracks.

I'm running the Astro A-5 (beefed up version of the T-5) on my LS1 powered car. I mostly just do autocross and had been running the 3.23 rear end. With the slicks (23" diameter rears) I was getting about 74mph out of second, and it was OK, but found the rev limiter a lot. I recently switched to the Ford 8.8 rear end, and went with a 3.08 rear end to try to get a few more MPH out of 2nd.  So far, it feels pretty good for autocross.  First is very usable (I think it goes to 48mph or so). In second gear, its a little low in the RPMs coming out of the slow corners (25-30mph), but it lets me be a little more aggressive with the throttle, and it's not so touchy digging out of a slow corner.
One of the surprising things I found that helped with making first gear "more functional", was when I switched to the lightweight flywheel. The first year I drove the car with the standard flywheel - not sure what type it was, but it was full diameter and pretty heavy. Last year, when I switched to the Tilton 7.25" flywheel and clutches, I struggled to launch the car in Second gear (like I had done before), and found first gear was very manageable and usable, now. Its kind of weird, but was like the heavy flywheel/clutch package was messing with how the tires were able to manage the torque. Not sure if anyone else has had the same experience. 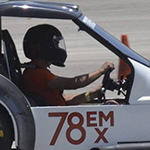