First travel night for us, we stayed at the Blue Swallow motor motel.  Each room had a little 1-car garage, which was cute, but we couldn't use it since neither the trailer or minivan would fit.  The following picture really belongs on a poster or magazine.  This was taken by one of our traveling companions, who had flown in from Germany for LOG35 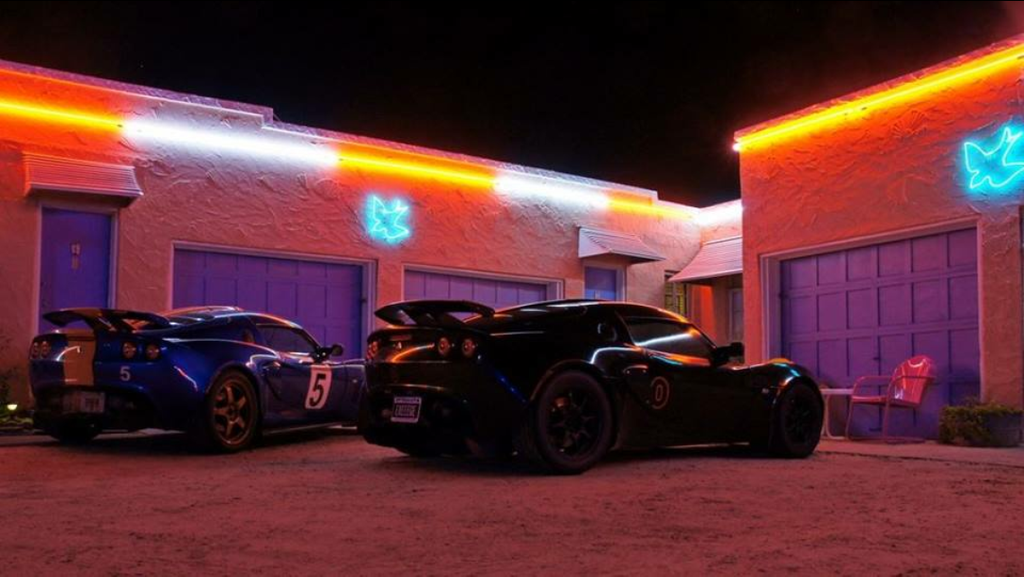 The next day started out not so good.  The leader of our 13-car caravan decided to travel 100 miles, but our minivan only had 57 miles of gas.  So, in the middle of nowhere, New Mexico, we deployed our escape pod, drove 30 miles back to a single-pump gas station, bought two gas cans, filled up, and drove back 30 miles to our minivan. 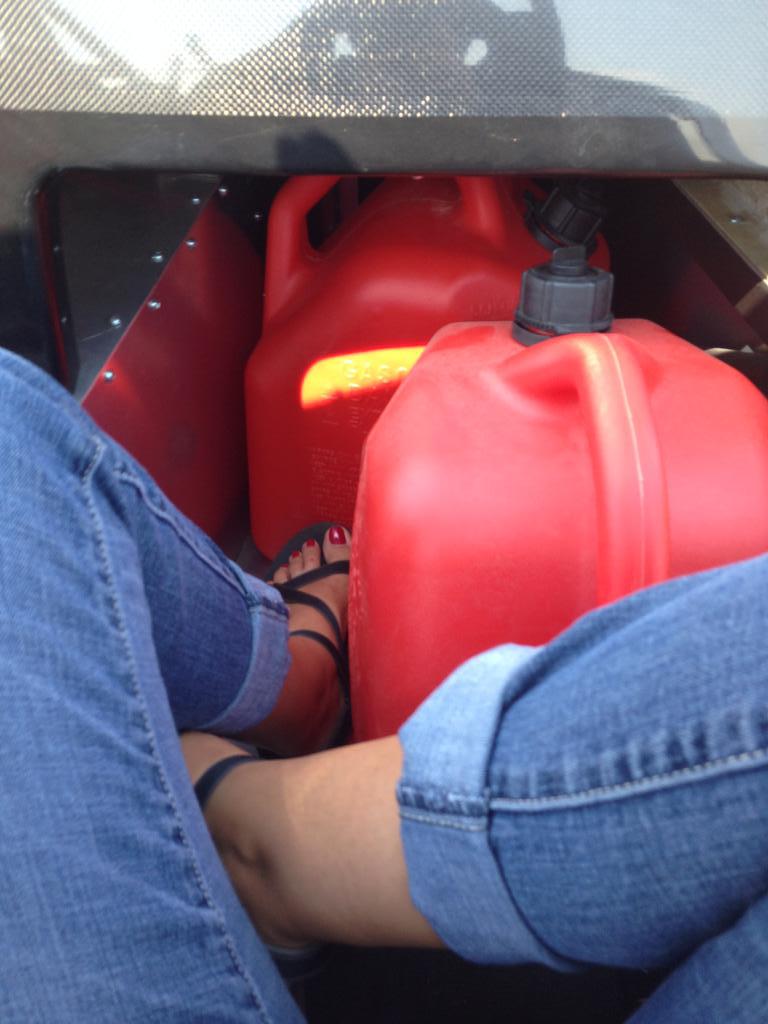 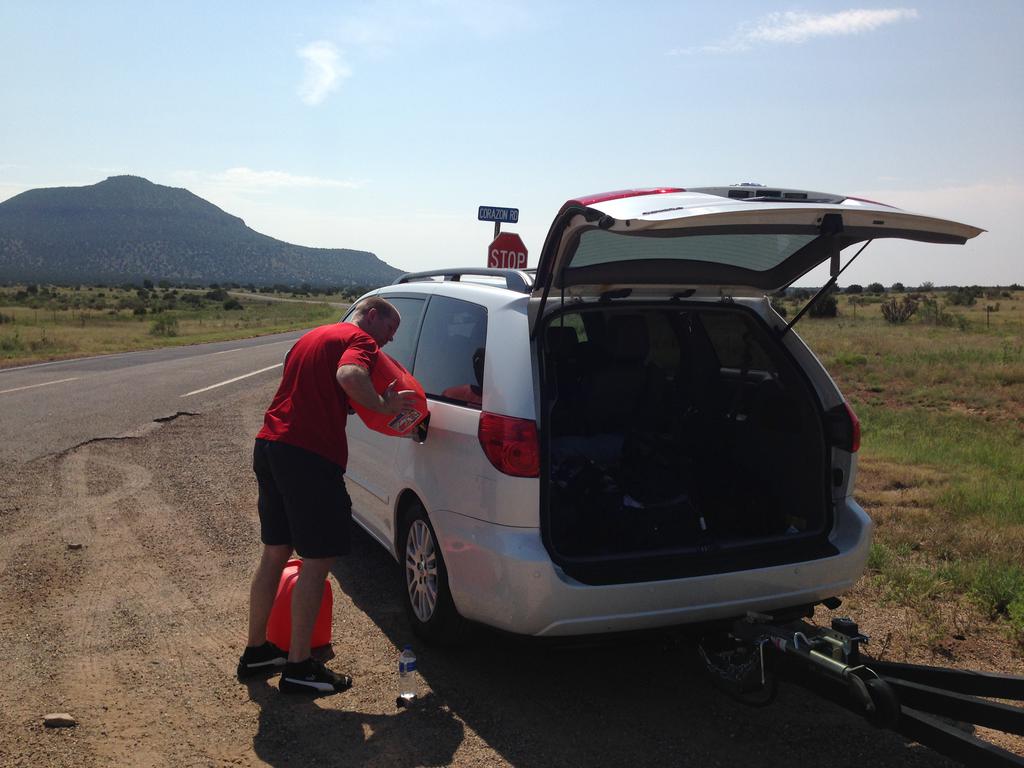 On group picture morning.  That's Pike's Peak in the background and Garden of the Gods in the foreground: 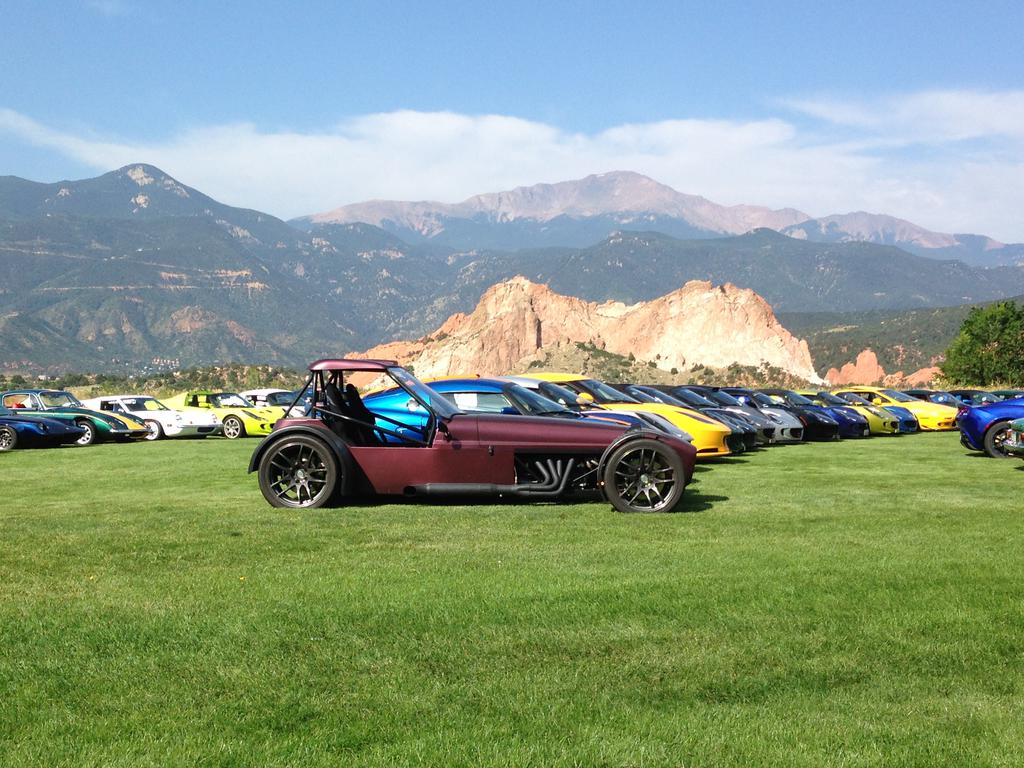 With the hood open.  It was amazing how many people came by to look at what was hiding under the hood. 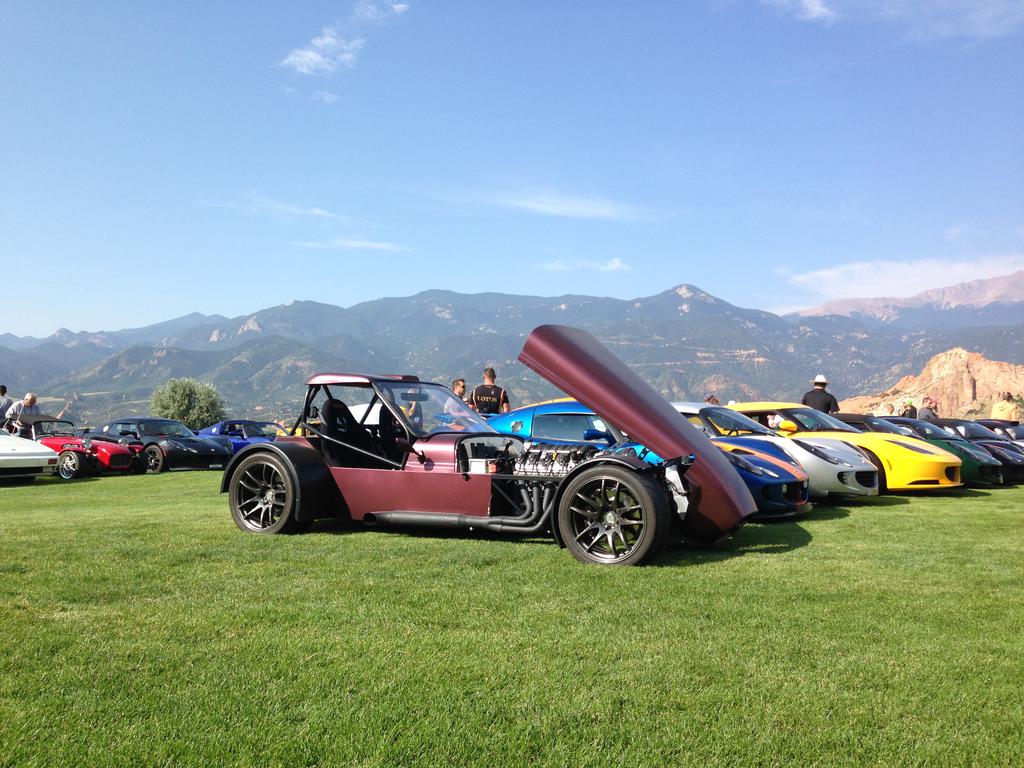 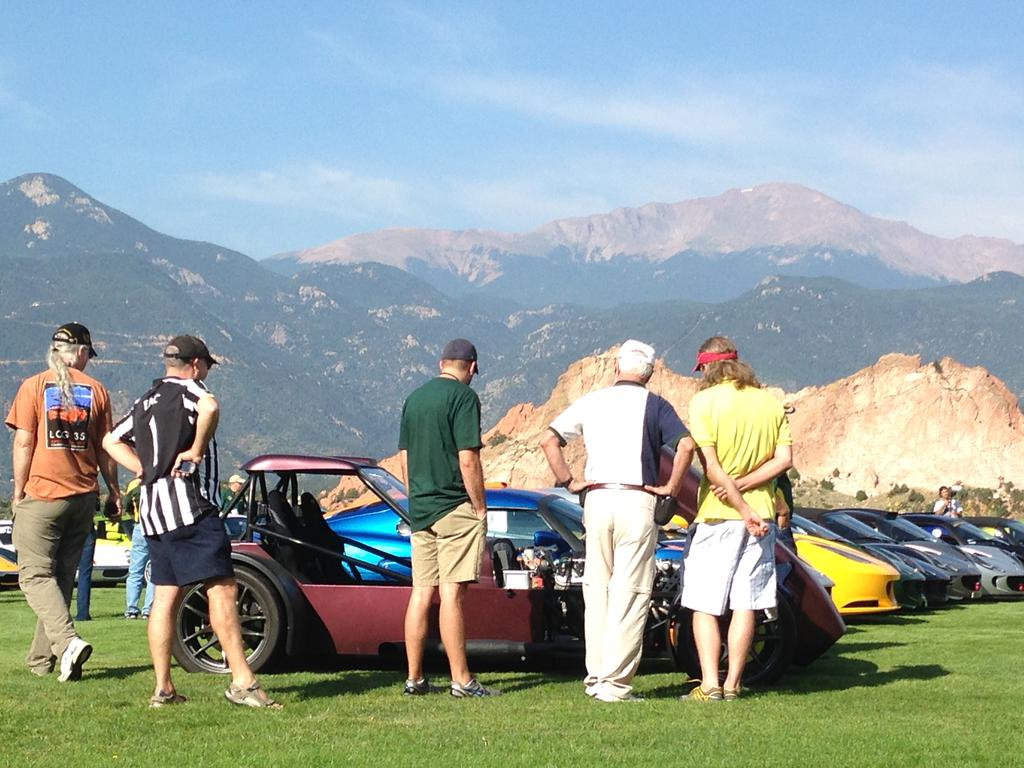 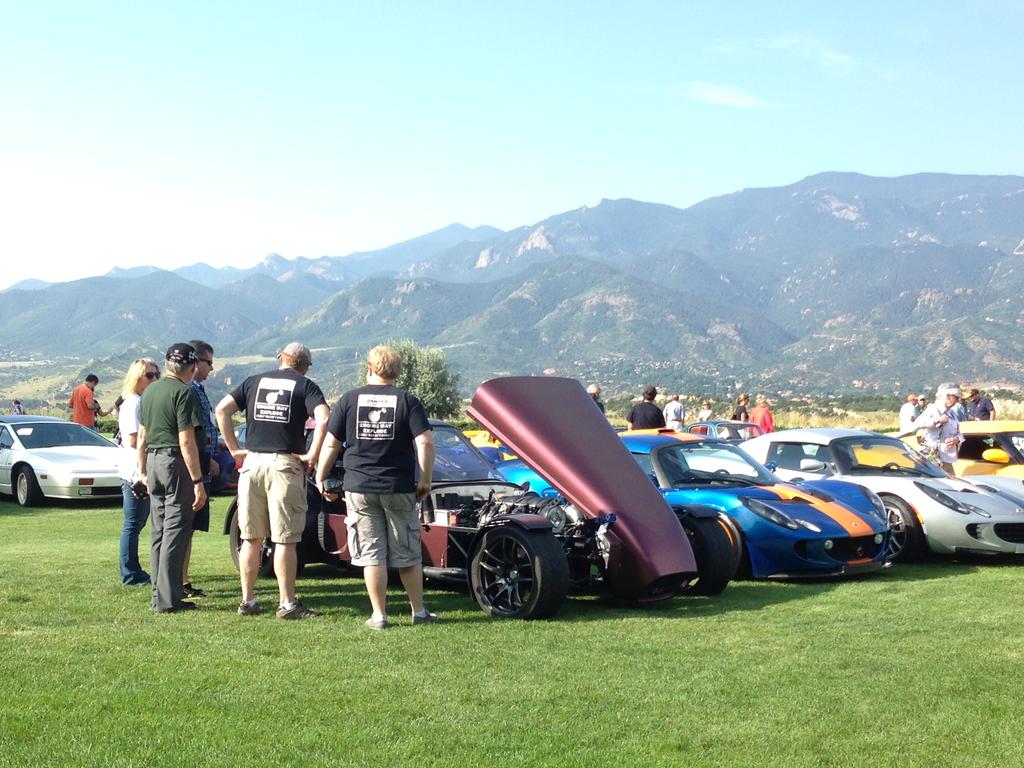 Our drive up to Pike's Peak on Saturday, this happened...twice.  The darn silicone coupler holding onto the MAF housing & air filter decided it didn't want to cooperate.  Twice I had to pull over on a steep road to try to put the intake assembly back into the coupler.  Plus, all my tools were with the minivan, which meant I used a key as my flat-head screwdriver.  The key has been pretty well mangled.  Thankfully, fellow Stalker owners Dale & Gale came to my rescue as they were descending from the Peak.  When I asked Dale if he had a flat-head screwdriver, instantantly, he presented what I can only imagine was a screwdriver that must live in a hip-mounted holster (almost like he knew I would be needing one...hmmm..... 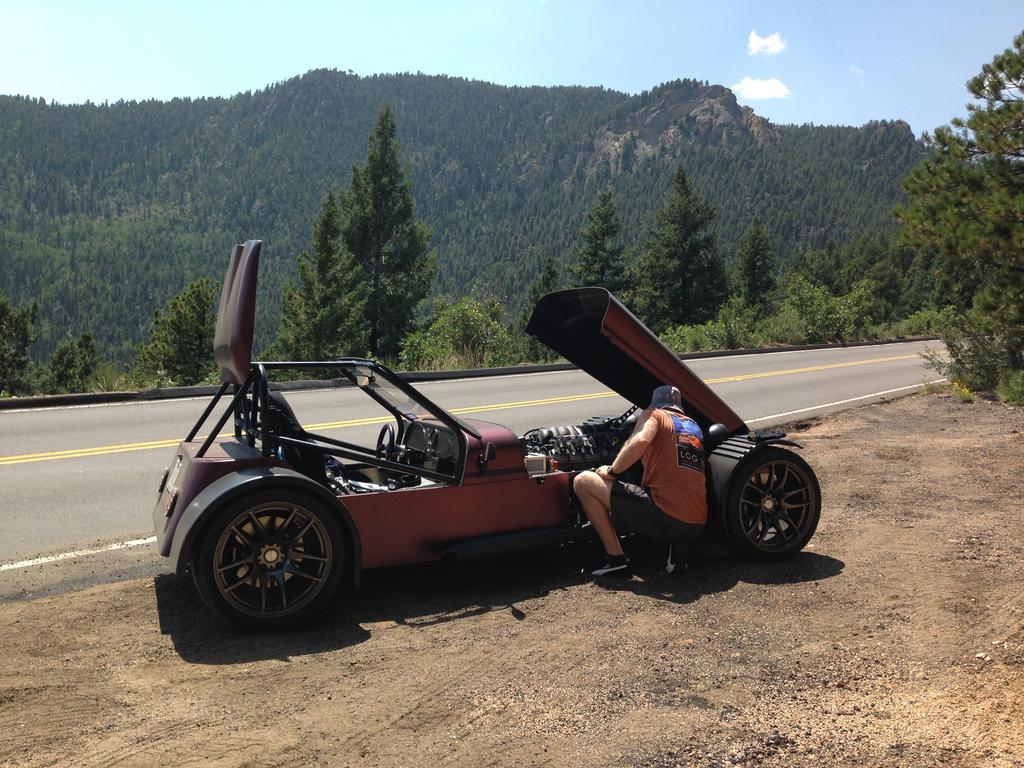 After getting that intake business resolved, we were on our way: 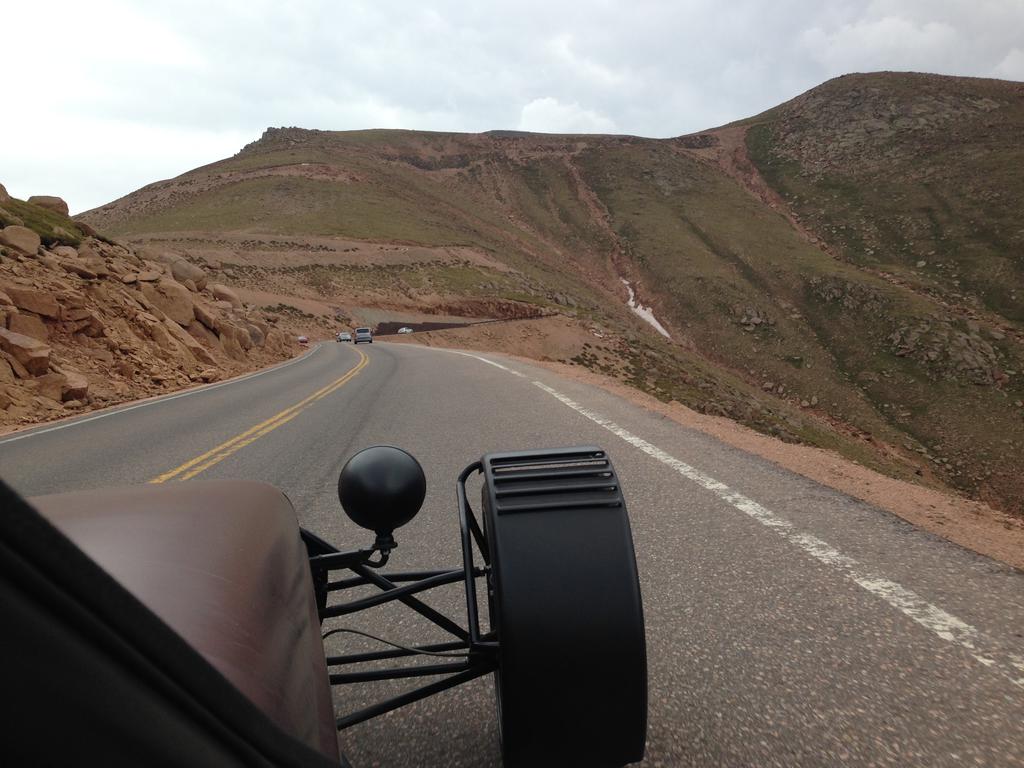 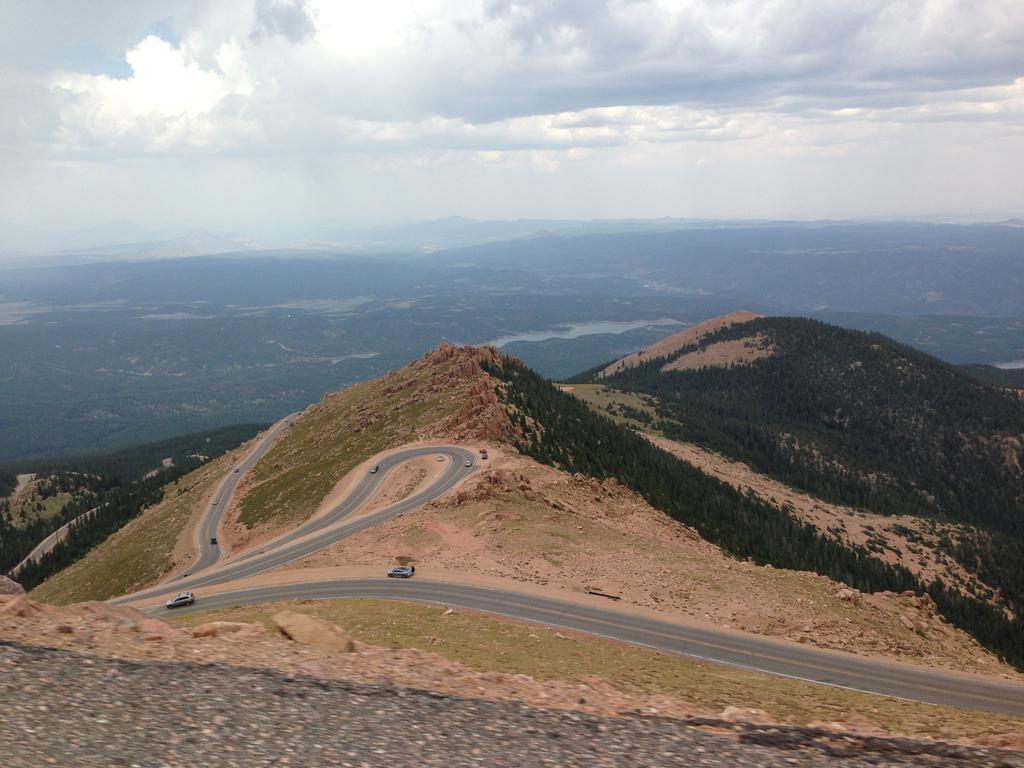 And, finally, after being stuck behind a Prius going 10 mph (literally) up the last two miles of the road, we made it.  Apparently, this Prius owner was impervious to horns, flashing lights, hand waving, and mild swearing from all of the cars in the long train behind him. 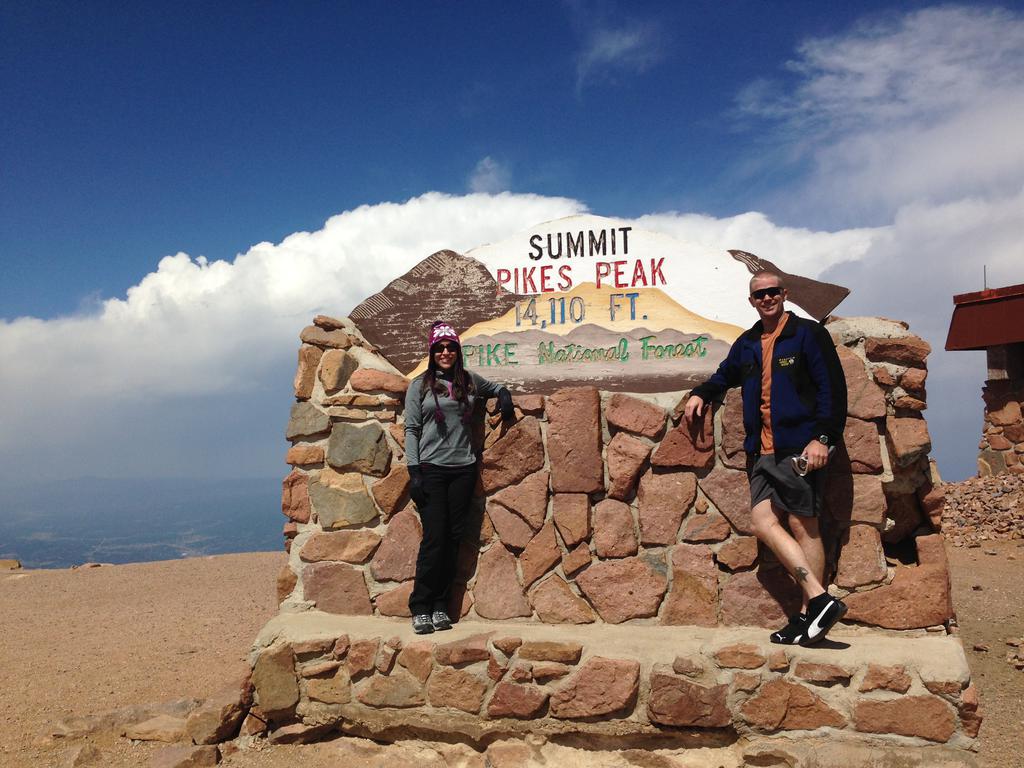 That night, I made a run to Home Depot's plumbing aisle and bought some of the shielded 4" rubber couplings to help add some strength & rigidity to the two silicone intake couplers.  I tossed the rubber innards of the shielded coupling because they were too big and just used the metal band & worm clamps on the existing silicone couplers.  So far so good, and everything held up nicely at the two events below.

Wifey & I took a little scenic drive on Hwy 24 on Sunday morning before she had to fly home.  It was a bit cold: 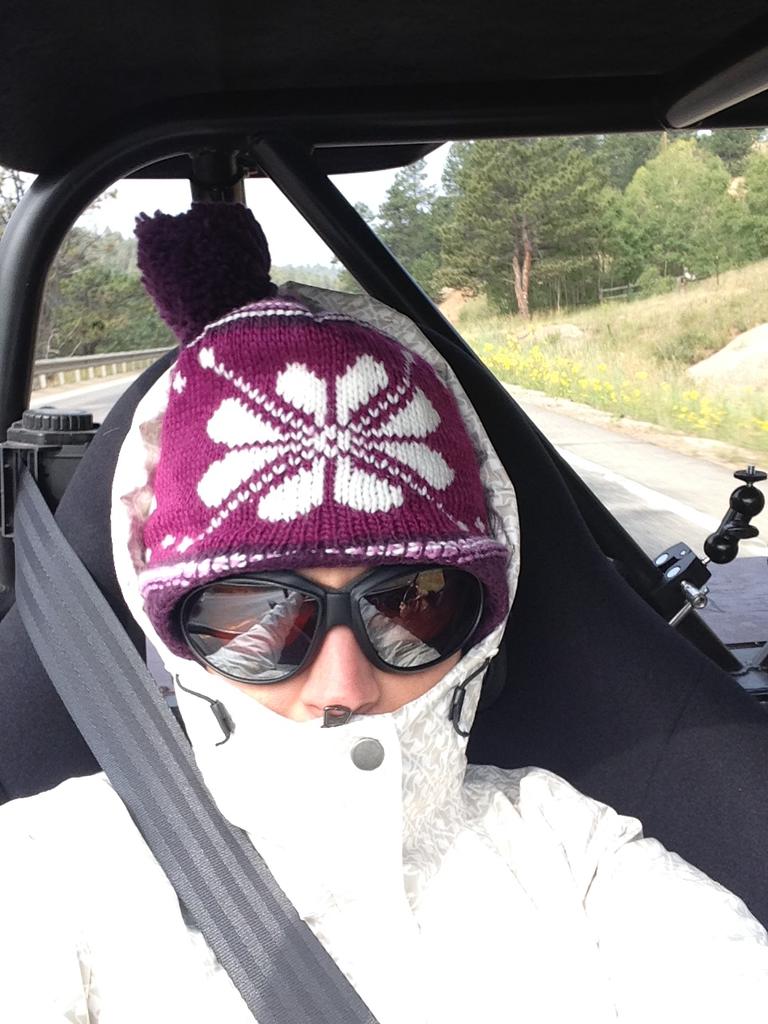 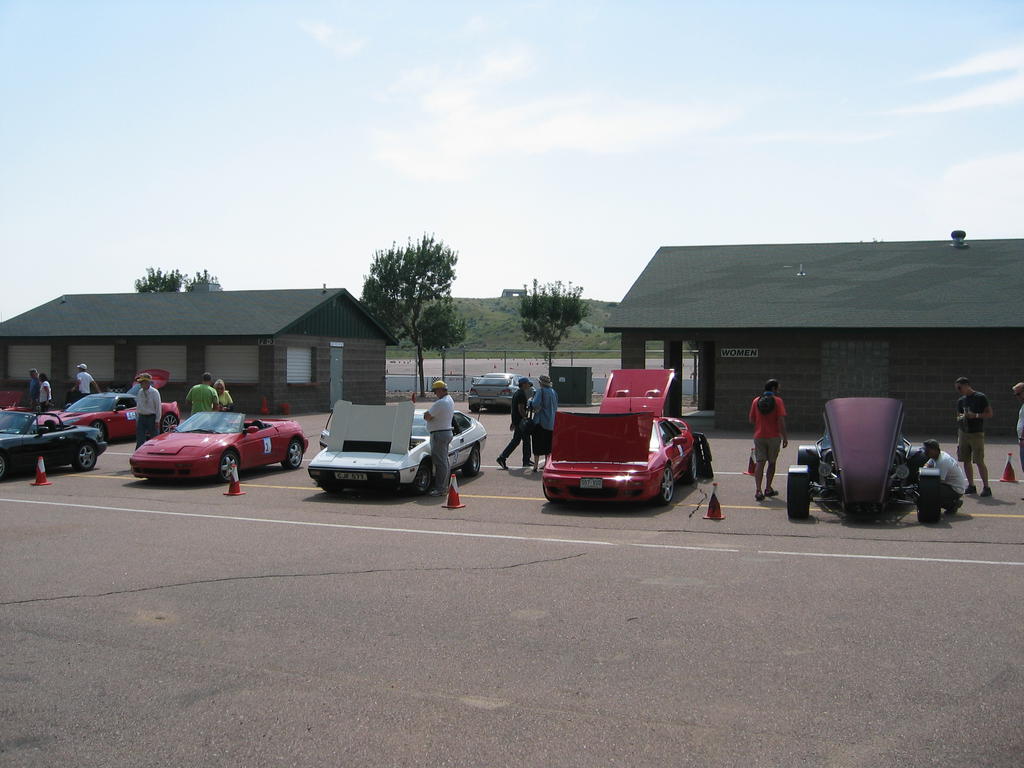 The Baby 7 ( pseudo go-kart, custom built by some folks in Colo Springs) 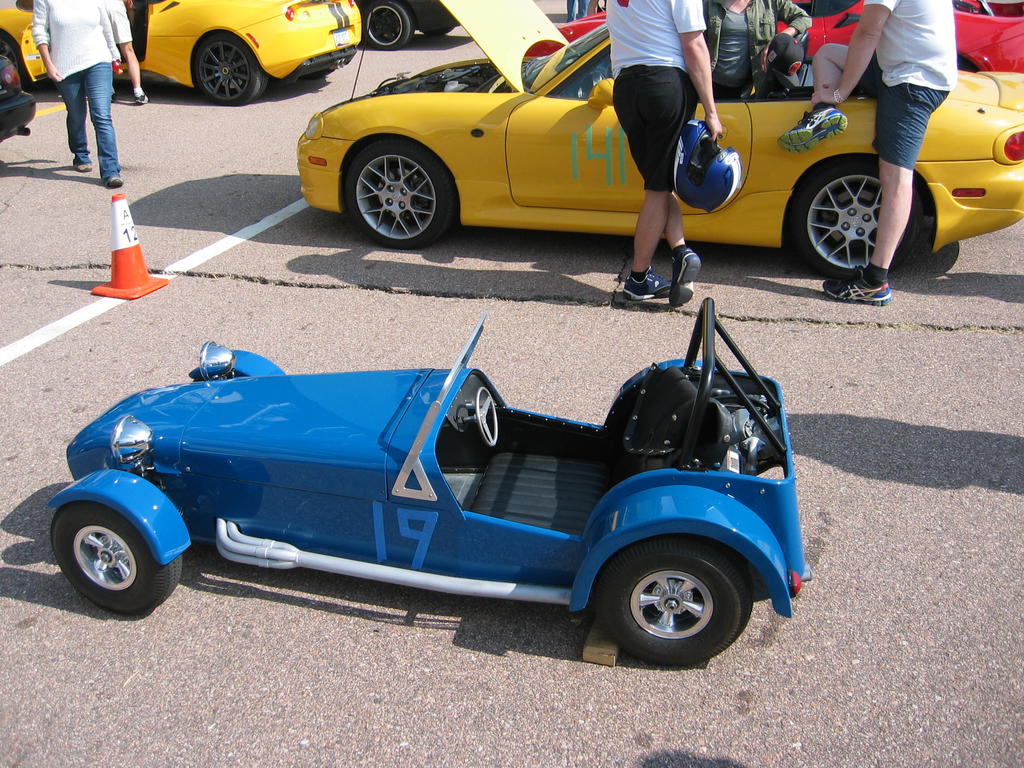 Soooo, I won a trophy for fastest time in my autocross "class"...buuut it wasn't really fair.  I was placed in a group with Esprits, Elan, Evora, a Tesla, and the baby 7.  But, hey, first is first.  FTD was grabbed in the "Elise & Exige" class by a wicked fast Elise with a driver who has lots of race experience, and it was a full 5 seconds faster than me.  But, let me say that this was my first time ever doing autocross, so I guess that's something: 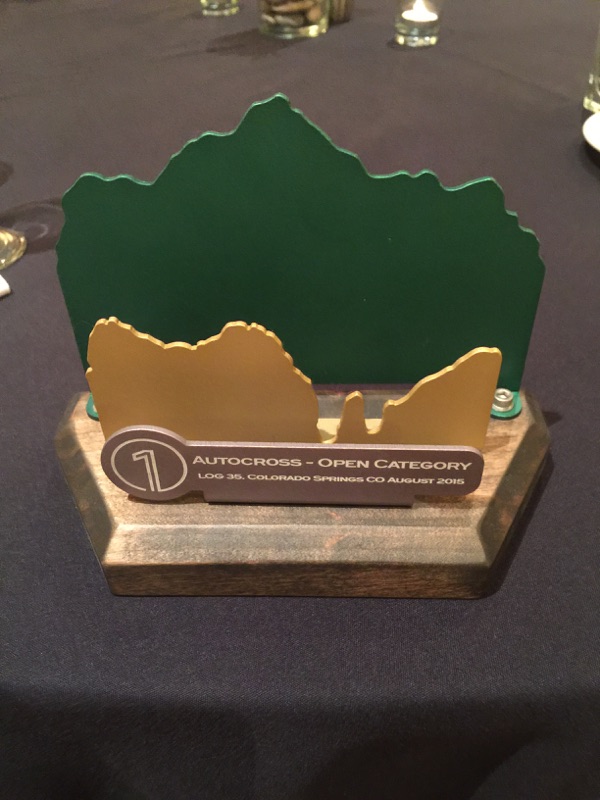 Track Day on Monday.  The Sienna did a great job pulling the Stalker trailer throughout the trip, btw. 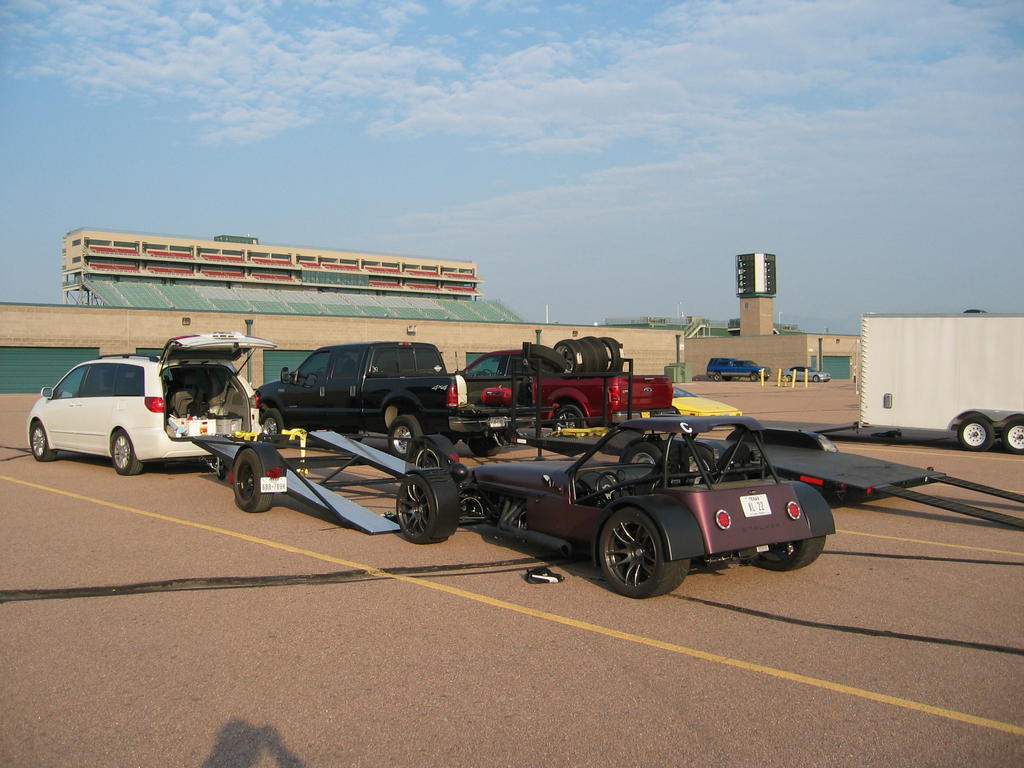 All lined up and ready to go.  Th car performed beautifully.  Interestingly, I had a tough time finding instructors.  They were honestly afraid of the car....seriously.  Jim Roberts (a guy who won a self proclaimed 220 out of 280 races) instructed me during my first session, but I think Jim R strongly objected to my lack of arm restraints, which is a fair critique and something I'll rectify before my next track outing.  Bill (lastname?) handled the remaining 4 sessions.  Bill & I really clicked, and he was very complimentary of my driving abilities throughout the day. 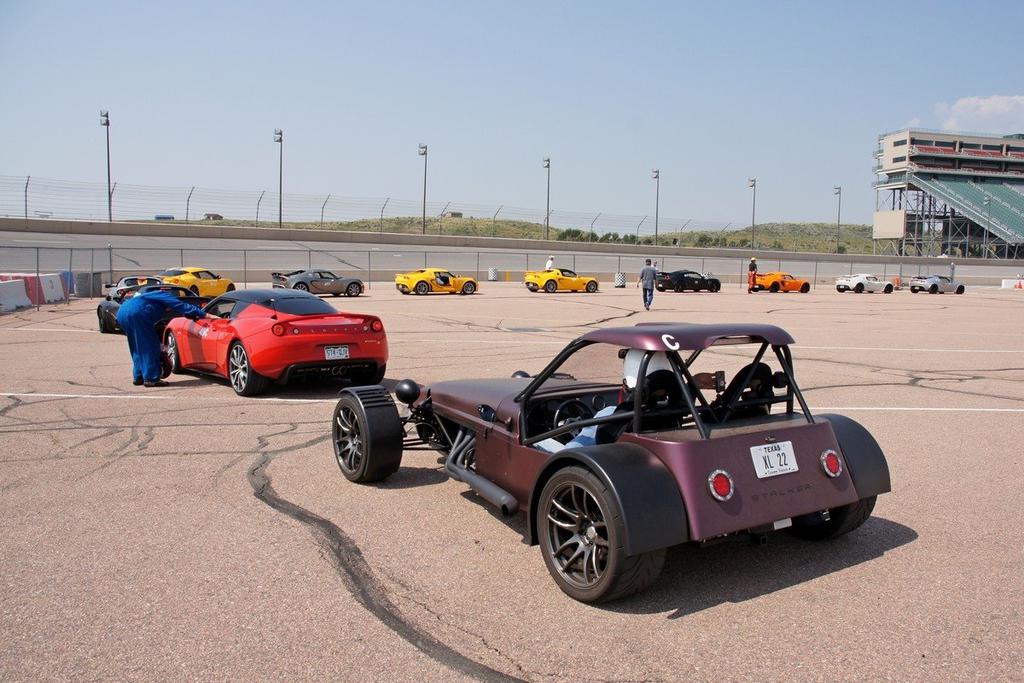 Unfortunately, I did make a mistake and didn't provide a proper briefing to another instructor buddy (who shall remain nameless) who I let drive my car.  I forgot to mention the key point that the car has no ABS, and he never asked about it.  In the first braking zone (not even half-way through the course) after a high speed banking section where you go from 100 mph to 40, he slams on the brakes and we spin 180 deg and zoom backwards off the track at a high rate of speed.  The result: 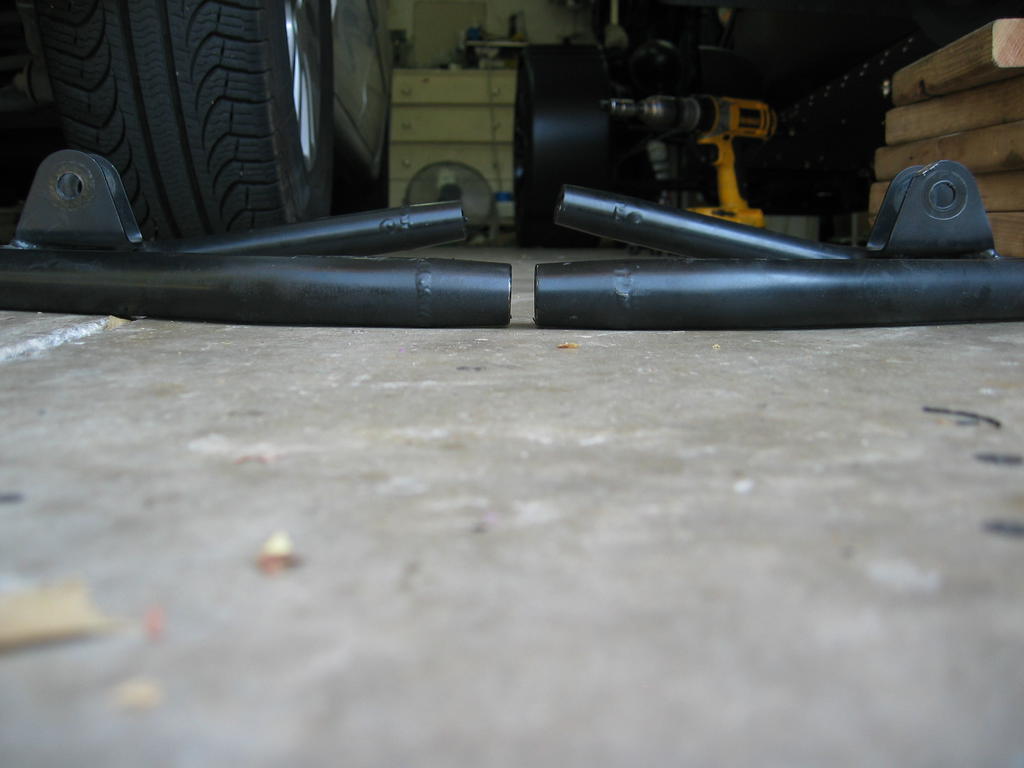 I have some new rear lower control arms on order from Stalker HQ.  The instructor offered to pay for them, and he also invited me to drive his car on my final session, to which I politely obliged.  And, even though he said I could ball up his car into the wall, I kept it in tact.

On the return trip home, a stop at a really cool BnB in Trinidad, CO 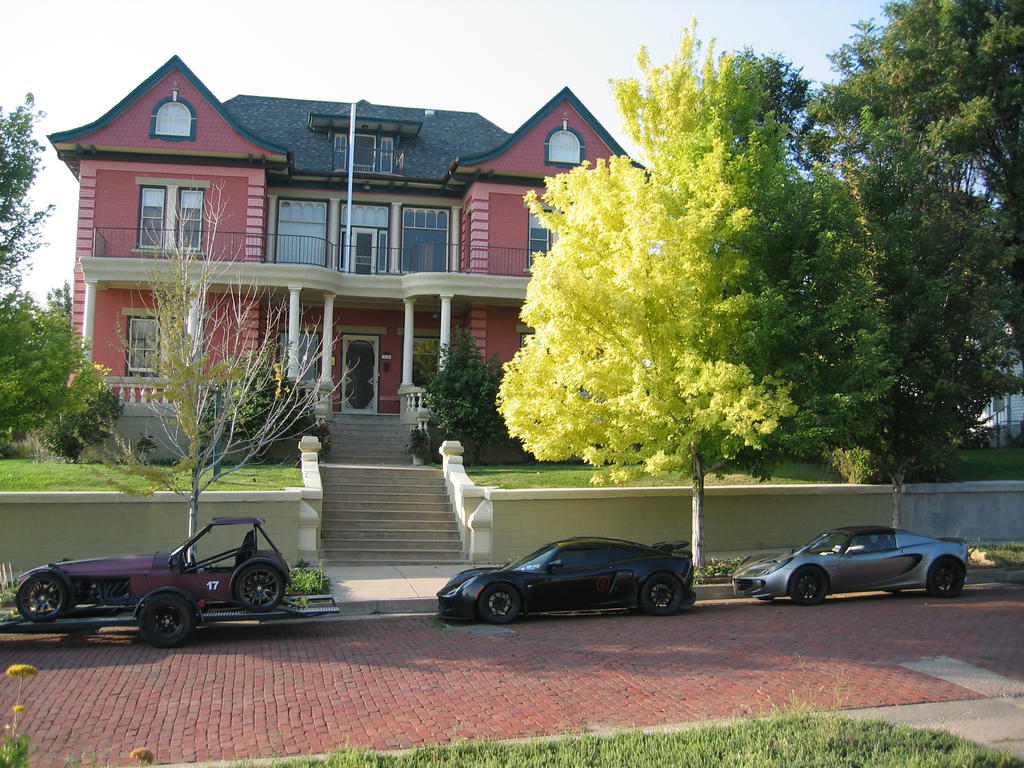 
Surprisingly, they initially had trouble finding an instructor for me; once they did, that instructor told me that some were afraid of the car.

I drove the oval section very conservatively, usually shifting into 5th or 6th with only a tiny bit of throttle input to get some low rev airflow to see how the coolant temp reacted and because the oval just isn't that exciting to me. My coolant temp warning light is set to come on at around 230F, which meant most of the time I was driving, that red light was on. But, after poking around the interwebs some, it appears that LS3's can operate higher than that without issue. My oil temperature light never came on, and it's set to trigger at about 270F; I think the oil temp was around 240-250F most of the time.

The infield portion of the course was fun, and the car handled it beautifully - so much grip, great brakes, gobs of power, and very well balanced. The same instructor rode with me on my last 4 sessions, and he was very complimentary of the car.

I exited early on one session because of a fuel smell and because fuel droplets splashed on the inside of the windshield, coming from behind the cockpit. After getting to the pits, I realized that my tank was so full that on the sharp right hander after the oval (Turn 4?), liquid fuel was overflowing into the vent hose (which connects to the top of the tank), then working its way down to the little breather filter at the bottom of the car, and as it dripped out of the filter, the wind would pick up the droplets and fling them into the cockpit. The same thing happened on the Pike's Peak drive, only it was tiny pebbles being carried by the wind back into the cockpit, not fuel (wifey & I couldn't understand why it kept raining rocks inside the cockpit)